One of the main reasons why we have been not so focused on paper representations of real currencies (i.e., gold and silver) is that ever since the MF Global debacle, in which it became all too clear that if physical gold can be “hypothecated” via conflicting ownership, then there is no way that paper versions of precious metals are viable and indeed credible. After all, the only real owner at the end of the day is the certificate holder, which as we have explained before, is none other than DTCC’s Cede & Co. Good luck collecting when the daisy chain of counterparties starts falling. Which leaves physical. And for a good sense of what the “real” price of the metal is, not one determined by institutions whose interest it is to preserve the hegemony of paper, one can either try to procure gold and silver at a retail merchant, or one can look to the premium of a dedicated physical ETF over spot. Such as Eric Sprott’s PSLV which as of today is trading at an all time high premium of 30%! In other words, someone is willing to pay up to 30% over spot for the right to be closer to the physical metal than merely have a paper claim on a paper claim (pre hyper rehypothecation and what not). Incidentally the last NAV premium over spot record was back in April 2011 just as silver went parabolic and the entire commodity complex experienced the infamous May 1 takedown when it collapsed by $8 dollars in milliseconds on glaringly obvious coordinated intervention. Said otherwise, like back then, so now there is an actual shortage, manifesting itself in the premium. And while last time its was the price plunge which eased supply needs, we are not so sure how one will be able to spin a collapse of the current, far lower paper silver price. 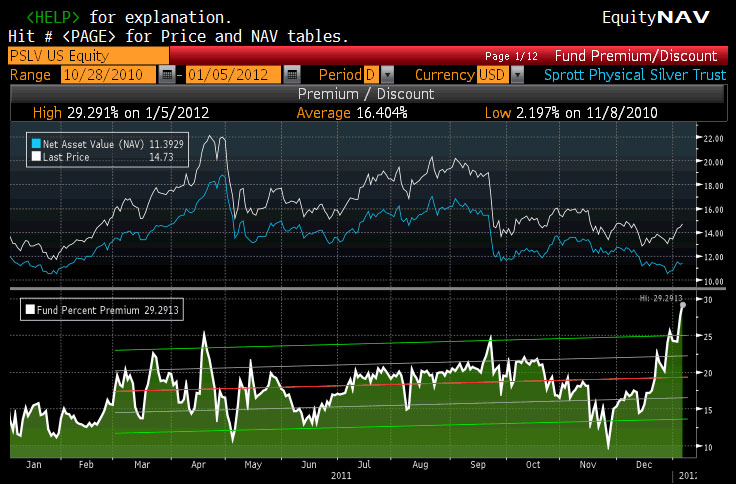 But wait, there’s more: As Keith Weiner explains below, silver also happens to be in backwardation. While we have covered the topic before, here is Keith with his explanation of what this means, although for those who like the punchline here it is, as above: shortage.

The Arbitrageur: Silver In Backwardation

March silver has been flirting with backwardation since the end of 2011, and today it has moved more firmly into backwardated territory.  This is extremely bullish for silver, and let me explain why.

Backwardation means (and I am oversimplifying a bit here) that a futures contract is cheaper than buying the physical good in the cash market.  To understand the meaning of this, the first question is this: Is it possible to warehouse the good?  If not, then the futures market is simply the market’s opinion of what the price is likely to be on the contract expiration.

Silver, unlike interest rate futures for example, can be warehoused.  This means it is possible to simultaneously buy physical silver in the spot market and sell a future in the futures market.  One has no net exposure to the price.  One is exposed only to the spread.  This is a simple arbitrage.  One can “carry” a good (buy spot, sell future).

The possibility of this and other arbitrages in a good that can be warehoused changes the whole structure of the futures market.  One cannot look at the price of March silver as a prediction of the March price.  Absent a shortage or other anomaly, the March price should be close to the spot price + the cost of carry (interest rate and storage).  March silver should be at a slight premium to spot silver.  This condition is normal, and it is called “contango“.

But that is not the case for March silver (or Jul 2013 and beyond).  Those contracts are priced too low for anyone to make any money carrying silver. Instead, it would be profitable to de-carry silver.  See the graph for a picture of the basis (the annualized profit one would make to carry) and the cobasis (the profit to de-carry).  The basis is negative and falling; the cobasis is positive and rising.

A de-carry is the inverse of a carry.  One simultaneously sells silver, and buys a future against it.  Silver (and gold) are unlike all other commodities in that the above-ground inventories are massive, compared to annual mine production.  Whereas in wheat, for example, there is a genuine shortage before the harvest.  If one wants to buy wheat two weeks prior, one must pay a large premium compared to the first contract settled after the harvest.

In a normal commodity, backwardation means shortage.  The backwardation develops because no one has any of the physical good.  So they cannot decarry it, and thus the spot-future spread can go deeper and deeper into backwardation.

But in gold and silver it means something else entirely.  People have the metal.  But for whatever reason(s), they choose not to take this free money.  In the silver market right now, trust is in short supply.  In the past (think fall 2010 through spring 2011), this has been resolved by sharply rising prices which coax fresh metal out of hiding.