Why? Because the Japanese people have overcome many obstacles in the past.

He looks too young to remember the days during the World War II when women and children were trained on downing B-29 high-altitude bombers with bamboo spears, and they truly believed it could be done.

The farmer, Mr. Sugeno, says “Even if children evacuate, adults must stay and repair the land”. Problem is that children are not evacuating.

To me, he’s trying his utmost best to convince himself, justify what he’s been doing and he will do. But here’s the video, so that you can make your own judgment:

http://uncannyterrain.com http://tinyurl.com/uncannyterrain Fukushima, Japan organic farmer Seiji Sugeno turns the tables on documentarian Ed M. Koziarski, challenging him to come out from behind the camera and reveal his own opinion about the nuclear crisis and the future of the farmers who’ve chosen to stay on their contaminated land near the failed Fukushima, Daiichi Nuclear Power Plant.

On the other hand, there are farmers like Mr. Tanno , who gave up on growing crops in Fukushima after the accident, and moved to Nagano to grow his highly-praised organic vegetables at the age of 70. Compare his smile selling his first batch of carrot juice with the harsh countenance of Mr. Sugeno in the video above. 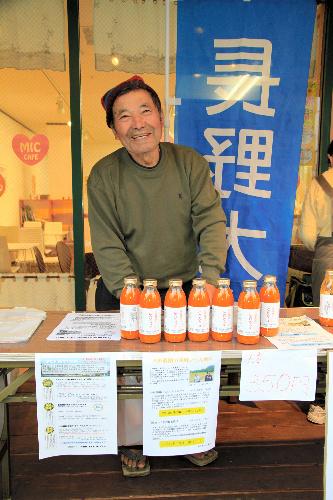