Remember that, when they tell you that radiation levels are ‘safe’:

Also from the article:

“Radioactive iodine releases from Japan’s Fukushima Daiichi reactors may exceed those of Three Mile Island by over 100,000 times….While Chernobyl had one source of radioactivity, its reactor, there are seven leaking radiation sources at the Japanese site. Together, the three damaged reactors and four spent fuel pools at Fukushima Daiicho contain (much) more long-lived radioactivity, notably cesium-137, than the Chernobyl reactor.”

“The radioactive (iodine-131) fallout is now as much as 73 percent of the daily radiation emitted from Chernobyl following its meltdown disaster.” For cesium-137, it’s 60%.

“I hate to say it, but I am pessimistic….We have to think of all six (reactors) going down, and the possibility of that happening is not low.” 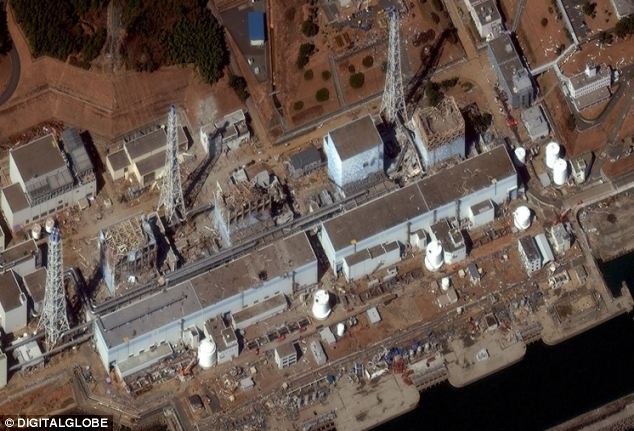 Japan’s March 11 earthquake/tsunami-caused nuclear disaster affects millions of people regionally and throughout the Northern Hemisphere. But you’d never know it from most major media reports, downplaying an unfolding catastrophe.

“Of all the places in all the world no one in their right mind would build scores of nuclear power plants, Japan would be pretty near the top of the list.”

“Japan sits on top of four tectonic plates….and is one of the most tectonically active regions of the world. (There) is almost no geologic setting in the world more dangerous for nuclear power than Japan.”

American cities like New York have no credible evacuation plans in case of nuclear disasters. Neither does Japan, its Fukushima response a clear example. In fact, however, there’s no adequate plan possible in cases of catastrophic nuclear events. How and to where do you transfer millions of people. Abandoning the technology alone can work, a possibility not considered, at least not so far.

“The scariest thing, on top of all the other problems, is that all the nuclear power plants are aging, causing a deterioration of piping and joints which are always exposed to strong radiation and heat.”

Even O’Reilly reacted skeptically to the “hormesis” notion. Wikipedia calls it: “the term for generally-favorable biological responses to low exposures to toxins and other stressors,” including radiation.

Other toxins aside, no amount of radiation is safe. In her book “Nuclear Madness,” Helen Caldicott explained:

“Lower doses of radiation can cause abnormalities of the immune system and can also cause leukemia five to ten years after exposure; (other) cancer(s), twelve to sixty years later; and genetic diseases and congenital anomalies in future generations.”

“Over 40 years ago….the Atomic Energy Commission (now the Nuclear Regulatory Commission) estimated that a full nuclear meltdown could contaminate an area ‘the size of Pennsylvania’ and cause massive casualties.”

In square miles, Pennsylvania is one-third the size of Japan. Nader said that “people in northern Japan may lose their land, homes, relatives, and friends as a result of a dangerous technology designed simply to boil water.”

“New signs emerged Friday that parts of the crippled Fukushima Daiichi nuclear plant were so damaged and contaminated that it would be even harder to bring the plant under control soon.”

Moreover, several workers were contaminated by water measuring 10,000 times above normal, according to the National Institute of Radiological Sciences. In addition, a senior nuclear executive said “a long vertical crack” running down the side of the reactor vessel (expected to enlarge) was detected “leaking fluids and gases.” The Times said, “There is a definite crack in the vessel – it’s up and down and it’s large. The problem with cracks is they do not get smaller.”

“Radioactive iodine releases from Japan’s Fukushima Daiichi reactors may exceed those of Three Mile Island by over 100,000 times….While Chernobyl had one source of radioactivity, its reactor, there are seven leaking radiation sources at the Japanese site. Together, the three damaged reactors and four spent fuel pools at Fukushima Daiicho contain (much) more long-lived radioactivity, notably cesium-137, than the Chernobyl reactor.”

Its half life is about 30 years. According to IEER president Arjun Makhijani, “This accident has long since passed the level of Three Mile Island.” Already, large parts of Honshu, Japan’s main island, have been affected. Even so, Japanese authorities haven’t been forthcoming about actual radiation releases that independent experts believe are extremely high and dangerous.

On March 26, government officials said predictions on when Fukushima could be stabilized aren’t known, spokesman Yukio Edano saying “this is not the stage for predictions.” According to IAEA head Yukiya Amano, “(t)his is a very serious accident by all standards, and it is not yet over.” Ending it “will take quite a long time.”

“The radioactive (iodine-131) fallout is now as much as 73 percent of the daily radiation emitted from Chernobyl following its meltdown disaster.” For cesium-137, it’s 60%.

Monitoring in Hawaii, Alaska, California, Montreal and other cities are registering Fukushima fallout. Yellow rain in Japan was reported, much like what happened after Chernobyl. Whether it’s entirely radioactive isn’t known. Contamination, however, is spreading, yet “the nuclear industry says stop worrying….it’s all safe!”

“….black smoke….was seen billowing from Reactor 3, (containing) highly dangerous MOX plutonium fuel,” prompting an “evacuation at all four reactors.” No explanation was given.

In addition, Kyodo News said “mysterious neutron beams (were seen) coming from the plant 13 times since” the earthquake/tsunami, suggesting uranium and plutonium releases from damaged reactors and fuel rods.

“If you want to cool a reactor down with water, you have to circulate the water inside and carry the heat away, otherwise it has no meaning. So the only solution is to reconnect the electricity. Otherwise, it’s like pouring water on lava.”

Moreover, by using salt water “(y)ou get salt. The salt will get into all these valves and cause them to freeze. They won’t move. This will be happening everywhere. So I can’t believe that it’s just a simple matter of reconnecting the electricity and the water will begin to circulate….I can’t understand it….Now it’s a complete mess inside….I’m speaking of the worst case, but the probability is not low….Only in Japan it is being hidden.”

“I hate to say it, but I am pessimistic….We have to think of all six (reactors) going down, and the possibility of that happening is not low.”

On March 25, tests showed they spiked to 1,250 times normal. NISA official Hidehiko Nishiyama criticized Tokyo Electric (TEPCO) for not following safety procedures inside the turbine building. Throughout the crisis, TEPCO hasn’t given accurate information on the disaster’s severity, downplaying it instead.

As a result, independent experts express grave concerns that conditions are much worse than reported. They also believe it will take months perhaps to contain Fukusima. In the meantime, radiation keeps leaking and spreading, but it will be years before the real toll is known. Downplaying its gravity is scandalous.

Stephen Lendman lives in Chicago and can be reached at lendmanstephen@sbcglobal.net. Also visit his blog site at sjlendman.blogspot.com and listen to cutting-edge discussions with distinguished guests on the Progressive Radio News Hour on the Progressive Radio Network Thursdays at 10AM US Central time and Saturdays and Sundays at noon. All programs are archived for easy listening.