Each day this week, silver has been hammered down at approximately 9:00 am EST. Now, we all know that this isn’t atypical…the EE have been doing this for years and we did see copper sell off at roughly the same time. However, several readers have brought to my attention the little nugget below and I think it requires your serious consideration. 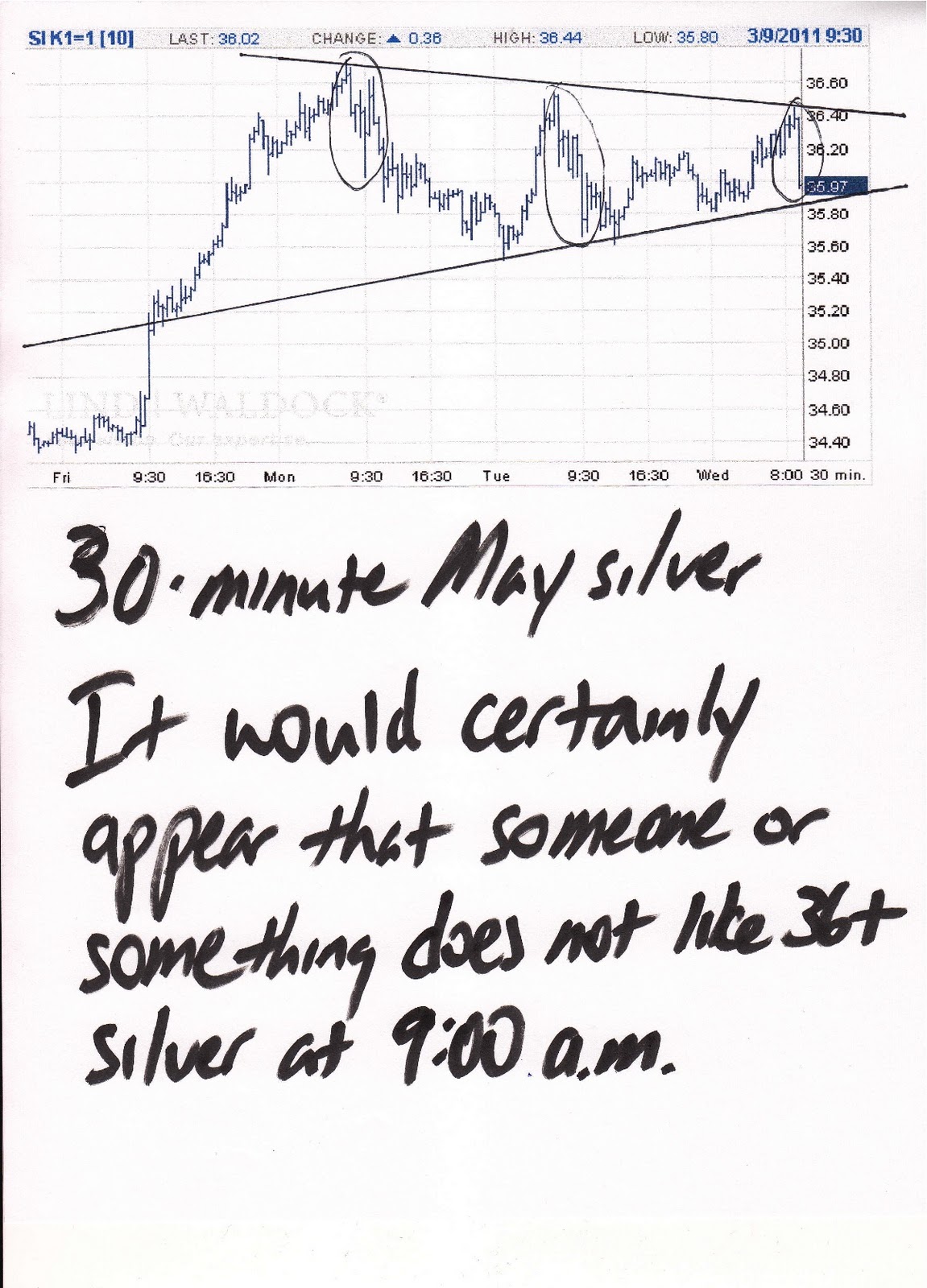 First things first, here’s a 15-minute May silver chart to peruse. Keep in mind that today’s smackdown was in the face of ongoing strength in gold and crude, so, silver acted somewhat independently.

This is what I am now hearing from traders on the floor. These traders are not even sure if Blythe knows the full extent of JPM’s silver exposure.

When I first started to realize that JPM has shorted far more silver than they could ever hope to cover, my first question was “why would they do that?” Not only that, why do it with a commodity where you must report your positions through the COT and Bank Participation Report? After all,the whole world can see what you are doing. [my added comment: Ted Butler included!]

Now I know the answer. According to Max Keiser and now a couple of other independent sources, it seems the reasons why first Bear Stearns and now JPM are so desperate to manipulate the price of silver down is due to the fact that BS and JPM shorted billions (yes billions not millions) in ounces of silver through their derivatives.

Just like Joe Conason at AIG, silver shorting through derivatives have caused literally billions in losses not the millions that we know about publicly. That is why JPM has been so desperate to manipulate the price of silver downward so blatantly. If I am right about this, then JPM will be dead when silver hits $60 or so. Based upon the COT and BPR, if silver hits $60, JPM will lose around an additional $6 billion dollars, a large number but not nearly large enough to bring down mighty JPM.

Since JPM was a price manipulator with respectt to the price of silver, JPM assumed that any derivative payments tied to silver would be less than they would be tied to some other index like the CPI or TIPS implied inflation index. JPM’s inability to hold down the price of silver relative to other measures of inflation will cause unbelievable losses due to a mismatch in their derivative structures.

In essence,JPM has bet (a huge amount)through derivatives that silver will never outperform inflation. And why not,since JPM assumed that it will always be able to manipulate the price of silver. We have now come to understand that JPM’s loss exposure to silver is much greater than we have ever dared to hope.
WB: In an effort to clear up some recent confusion regarding my latest posting, I will try to explain what I have recently uncovered.

JPM’s current short silver position is estimated to be approximately 150 million ounces down from the recent 180 million ounces in August. The losses from these positions are easy to figure out. For every $10 rise in the price of silver, JPM will lose $1.5 billion. But what I have recently discovered is that through its derivative positions, JPM will lose about 5 times that amount ounce the price of silver is above $36. And ounce silver is above $45 dollars, JPM’s losses will increase to 8 times the amount of losses in their short positions. The reason is that as the price of silver increases, certain provisions get activated which multiplies the losses.

JPM market cap is around $170 billion. If silver losses are as great as $40 billion in cash , then JPM will be insolvent. Period.

From your former traders (whom you dismissed so callously)”

Look, I still have absolutely no idea if this whole “WB Group” thing is real or imagined. There are, though, a lot of coincidences and in a rigged and manipulated “market” such as silver, the old phrase about “there are no coincidences” certainly rings true.

Full article here: Along The Watchtower