– With $5 Trillion In US And European Funding Needs Over The Next 3 Years, How Long Until The Global Monetization Tsunami Hits (Again)?

– Portugal: Only €4 Billion In Cash Vs €20 Billion In Bond Maturity And Deficit Ouflows In 2011 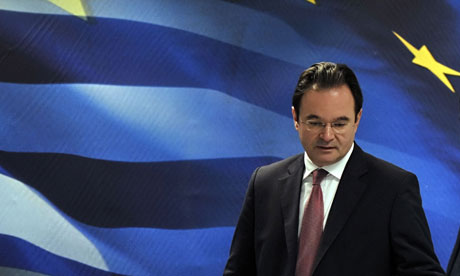 Moody’s has angered the Greek government, including finance minister George Papaconstantinou, by slashing its credit rating to B1. Photograph: Louisa Gouliamaki/AFP

Portugal took a step nearer a humiliating multibillion-pound bailout by the European Union on Monday after Greece saw its credit rating slashed to a new low and speculation grew that eurozone leaders will fail this weekend to agree measures to prevent a repeat of last year’s sovereign debt crisis.

The ratings agency Moody’s cut Greece’s credit rating by three notches to B1, which analysts said was deep into “junk” territory, sending the cost of insuring the country’s debt soaring.

The downgrade, which was attacked as reckless and “completely unjustified” by the Greek government, highlighted the collapse in confidence among international investors who fear peripheral eurozone countries such as Greece, Portugal and Ireland cannot afford to repay their debts.

Greece, like Ireland, has already been forced to accept a rescue package put together by the EU and the International Monetary Fund. Portugal is widely regarded as the next country in need of a bailout as it struggles to refinance its debts while still in recession.

Deutsche Bank credit analysts said: “There seems to be an increasing view from EU leaders that the need for a complete overhaul of the current rescue framework is no longer required. For us, this is increasingly leaving the peripheral situation as a potential macro shock in the months ahead.”

EU leaders fear offering a bailout to Portugal will leave Spain exposed as it is wrestling with massive bank debts.

The Greek prime minister, George Papandreou, called an emergency meeting of his cabinet last night in a desperate attempt to calm the situation. He was particularly upset that Moody’s gave a negative outlook on fears that Athen’s fiscal adjustment programme was overly ambitious.

The ratings agency warned that its debt grade could be slashed further if the government’s commitment to austerity measures and reforms, demanded in exchange for its €110bn (£95bn) bailout waned. The country’s failure to crack down on rampant tax evasion was also criticised.

“The negative outlook on the B1 rating reflects Moody’s view that the country’s very large debt burden and the significant implementation risks in its structural reform package both skew risks to the downside,” the agency said.

Tomorrow’s planned sale of six-month government T-bills, following the downgrade, will be seen as a “crash test” for the eurozone member on capital markets.

Papandreou, who convened the surprise cabinet meeting despite a public holiday in Greece, is believed to have been enraged by the downgrade at a time when ordinary citizens are enduring some of the harshest belt-tightening in modern times.

In a statement verging on tirade, the Greek finance ministry hit back, saying the move “reveals more about the misaligned incentives and the lack of accountability of credit-rating agencies than the genuine state or prospects of the Greek economy”. He added: “Having completely missed the build-up of risk that led to the global financial crisis in 2008, the rating agencies are now competing with each other to be the first to identify risks that will lead to the next crisis,” it counted.”With the country experiencing its worst recession since the second world war, the leader is eager to extend the repayment period of the rescue loans beyond their expiry date in 2013, but in recent weeks has met resistance from Germany which is bankrolling much of the package.

He said: “At a time when the global economy is fragile and market sentiment is sensitive, unbalanced and unjustified rating decisions such as Moody’s today can initiate damaging self-fulfilling prophecies and certainly strengthen the arguments for tighter regulation of the rating agencies themselves.”

Moody’s announcement could heighten pressure on eurozone leaders to ease the repayment terms through bond purchases or buy backs.

Since the crisis erupted shortly after the socialists assumed power in October 2009, cuts to wages, pensions and tax hikes have seen the purchasing power of Greeks drop by as much as 20 percent The measures have often been met with street protests and violence.

But the centre-left administration has also come under fire from the country’s international creditors for failing to implement long overdue structural reforms.

The changes, which include streamlining of loss-making public utilities, ending profligate practices in the health service and opening up scores of Greece’s notoriously “closed” professions, are seen as crucial in liberalising the European Union’s least competitive economy.

While a record number of reforms have been passed by the Greek parliament over the past year, few have been implemented despite unprecedented pressure from international organisations such as the IMF and EU.

Tax evasion has also played a major role in revenue shortfalls. Although Athens recently announced draconian legislation penalising tax dodgers, it has been slammed for inadequately addressing the problem.

Instead, analysts say, there is a growing sense of paralysis with the the government beset by infighting and unable, or unwilling, to enforce reforms because of popular opposition and resistance from unions before this week’s critical summit in Brussels.