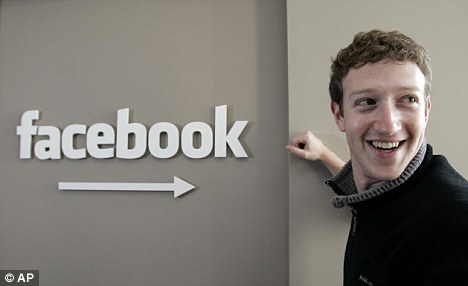 Technology giants Google and Facebook are reported to be in talks to buy Twitter, the popular social networking site.

Executives at the two companies have been engaged in low-level discussions with Twitter for months, according to the Wall Street Journal.

Twitter, which is favoured by the famous to send out snippets of information, is said to be valued at up to £7.5billion.

The takeover of company, which only launched three years ago, would mark the first major acquisition by Facebook founder Mark Zuckerberg.

His own social media site started in a Harvard University dorm room seven years ago has experienced an explosion in popularity and is now worth said to be worth £30bilion.

Twitter is the social networking site that allows users to send short, 140-character messages to each other.

Scores of celebrities including John Cleese, Stephen Fry and Piers Morgan are active users of Twitter which was started in 2007.

Even President Obama has a Twitter account and there are estimated to be more than 190milion users worldwide.

Latest figures show there are over 65 million ‘tweets’ a day.

As well as Google and Facebook, which in seven years has attracted 500million users, other US tech companies are said to be looking at acquiring Twitter.

What has surprised many analysts is not the talk of takeover but the valuation put on the company.

‘What’s remarkable is the money that people familiar with the matter say frames the discussions with at least some potential suitors,’ according to the Journal’s article.

Executives at Google, the world’s most popular search engine, and Facebook have refused to comment on the reports.

Wall Street analysts are sceptical about the multi-million pound price tag being attached to Twitter.

It has only recently agreed to allow advertising and last year had revenue of just £30million.

In December the three co-founders, Jack Dorsey, Biz Stone and Evan Williams,secured £140million in financing from the venture capital firm.

The cash injection meant the company was valued at just over £2bn.

Google are said to want to acquire Twitter so it deliver real time information to users.

Insiders at Twitter have said the co-founders will reject any takeover bid as they believe the company can still expand into a £60billion business.