(CNN) — Long a pillar of Hosni Mubarak’s three-decade rule over Egypt, Omar Suleiman now sits at the top of the pyramid as its de facto president.

Under pressure from street demonstrations calling for his ouster, Mubarak named his veteran spymaster to the long-vacant vice presidency in late January. Suleiman quickly became the face of the government’s reform pledges, announcing talks with opposition leaders and promising swift reforms.

– Here’s The Reason For Mubarak’s Power Hand Off Delay: Plundering The Gold

– WikiLeaks: Suleiman told Israel he would ‘cleanse’ Sinai of arms runners to Gaza 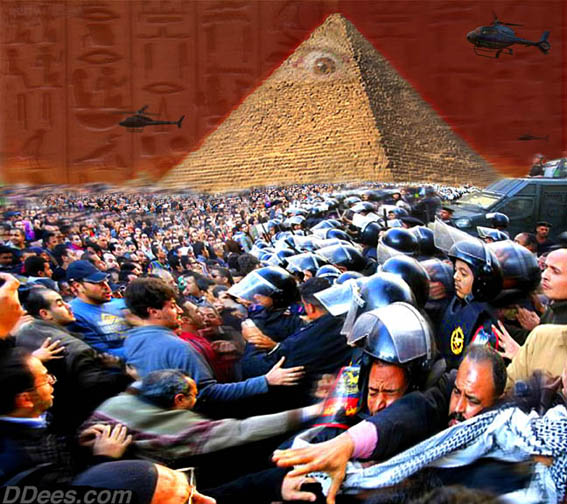 The following is the transcription of Press TV’s interview with Said Zulficar, a political analyst in the capital Cairo, regarding the latest developments in the crisis-hit country and what might follow.

Press TV: Mr. Zulficar, how are you feeling right now? It must just be an electric time in Cairo at the moment.

Zulficar: Well I was in Tahrir (Liberation) Square when the news came that the president has resigned. I knew that a couple of hours before he had left Cairo and was in Sharm el-Sheikh. I was in front of the television station which was surrounded by several thousand demonstrators and I walked to Tahrir (Liberation) Square when the news came out. Of course there was over joy, jubilation, etc… I still have reservations about this whole thing because although we have the first step or the first necessity demanded by people that the president resigns and leaves but the regime seems still to be in place because the person who is the head of the military council is one of his closest associates. General Tantawi has been minister of defense for more than 25 years and he is a very close friend of President Mubarak. So what has happened is, I think, the military top brass have found out that the president was a liability and that they must put order, they must save the bridges, the opposition and the state and they are taking over.

Now what is [Vice President] Omar Suleiman’s position? No one knows that he remains in his position as vice president. The government of course is going to be changed. But the top brass, all of the members of this military council, [are] all very close hand-picked generals picked by Mubarak over the years. And obviously screened by CIA. So I still have reservations, we’re just starting. We have succeeded in a very important step which is getting rid of Mubarak. But Mubarak for the past five years has not been governing this country. He’s been sitting in Sharm el-Sheikh where he is now; he has been for five years. He hardly ever comes to Cairo. It has been run by General Omar Suleiman who was vice president until a couple of hours ago, may still be. It was run, from security point of view and from a foreign policy point of view by Omar Suleiman. He is a close friend of the Israelis and of the Americans. Nothing has changed.

I have been watching the understandable euphoria in Egypt live on Al Jazeera television, but please, there must be a sense of perspective here – and urgently.

There has been NO REVOLUTION so far – a despicable tyrant has gone, but the army that imposed the will of that despicable tyrant for 30 years is now in charge and the Egyptian army is not only controlled by the US, it is funded by massive American military ‘aid’ – second only in scale to Israel.

It is true that the army didn’t fire on the demonstrators as it would have done before, but it did so at the time that its masters in America were calling for Mubarak to step down, in effect, and for the protestors to be left alone. Why did the US government do this after supporting the tyrant for 30 years? Because they want ‘regime change’ in Egypt as part of a domino effect across the whole Middle East to advance a much bigger agenda.

Mubarak’s demise was announced by his vice-president, the US puppet, Omar Suleiman, the head of the vicious and murderous Egyptian General Intelligence Directorate that as well as controlling the population through sheer terror also accepted Muslim detainees arrested by the US to be tortured in Egypt in ways that would have been illegal in America – the so called ‘Extraordinary Rendition’.

And waiting in the wings is America’s (the Illuminati’s) man, Mohamed ElBaradei, who is on the Board of Trustees of the International Crisis Group of Rothschild front-man, George Soros, and his associate Zbigniew Brzezinski, who specialise in triggering and manipulating ‘peoples’ revolutions’ to change regimes while hiding the force that is really behind it all.

It is wonderful to see the joy of the Egyptian people at the end of Mubarak, but the job is only half done and if it ends here nothing will change. ‘Peoples’ revolutions’ covertly inspired by the money and agencies of George Soros in Georgia, Ukraine, the Czech Republic and elsewhere also has their moments of enormous euphoria when a regime fell, but any revolution of the people can only be judged by what replaces that which is removed.

Others have been deeply disappointed and disillusioned in the past and if Egypt is not to go the same way the focus and determination must not be lost – and ElBaradei must not prevail, nor anyone else who represents the forces of control and suppression.

Out of the frying pan into the fryer is not a revolution.