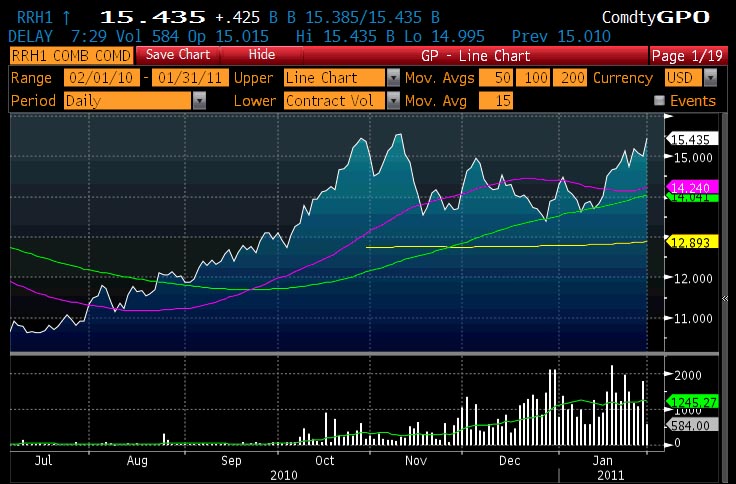 The one commodity which has so far sneaked quietly between the cracks of rampant limit up opens and overnight price surges, just happens to be the most important one: rice.

If the price of rice were to follow the same fate as wheat, not to mention chocolate, and if the world starts getting visuals of what is happening in Egypt transposed a few thousand miles east, smack in the middle of Guangdong province, then not even the Sack Frost dynamic futures lifting duo will be able to do much to instill confidence that the revolution is progressing “better than analyst estimates.”

And it appears that the seeds of rice’s price surge may already have been planted. Bloomberg reports that “U.S. farmers are planting the fewest acres with rice since 1989 just as global demand surpasses production for the first time in four years, driving prices as much as 12 percent higher by December. Plantings in the U.S., the third-biggest shipper, may drop 25 percent this year because growers can earn more from corn and soybeans, according to the median in a Bloomberg survey of nine analysts and farmers.

Rice, the staple food for half the world, declined 4 percent last year, extending a 2.9 percent drop in 2009. The other crops jumped 34 percent or more.” Zero Hedge predicted in October of last year that the next real bubble will be rice. We stand by this prediction, which has so far not been validated presumably due to some quite interesting behind the scenes PM-for-food arrangement between China and one of the very popular US TBTFs. As the chart shows,  rice is poised for an imminent break out.

“Why would you want to take that risk to plant rice, knowing that your income is going to be way down?” said Terry Hatley, a farmer in Marked Tree, Arkansas, who may not plant any rice this year after growing the crop for more than three decades. “Farming is a business, and you’ve got to look at the economics of it. Now, the economics on rice are very dim.”

Bangladesh, South Asia’s biggest buyer, doubled a target for imports in 2011 to curb prices, the Directorate General of Food said last week. The Philippines, the world’s largest importer, will probably start buying next month, according to the National Food Authority. While global stockpiles are predicted to be 26 percent higher this year than in 2007, consumption will gain 3.4 percent and harvests 2.6 percent, the U.S. Department of Agriculture estimates.

The Thailand export price, the benchmark in Asia, may climb as high as $600 a metric ton by December from $534 on Jan. 26, a gain of 12 percent, according to the median estimate in a Bloomberg survey of eight traders, exporters and analysts.

The rice price is currently in the clam before the storm:

“The acreage war has begun,” said Dennis Delaughter, the owner of Progressive Farm Marketing Inc. in Edna, Texas, who expects futures traded on the Chicago Board of Trade to advance as much as 20 percent to a three-year high of $18 per 100 pounds by November. “Of all the futures markets in the agricultural sector, rice is the sleeper,” said Delaughter, who correctly predicted an 11 percent gain in prices last March.

Rice represents almost 50 percent of the food expenses of the poorest across the developing world, and 20 percent of total household spending, according to the International Rice Research Institute, based in Los Banos, the Philippines. In the U.S., 6 percent of incomes are spent on groceries, data from Euromonitor International show.

While the United Nations says global food prices climbed to a record in December, grain stockpiles have been replenished since 2007-2009, when the U.S. State Department estimates there were more than 60 food riots around the world.

And as rice imports have no choice but to surge, speculators will sooner or later overrun the same synthetic paper short that has kept spec non-commercials out of the rice market.

Bangladesh doubled its rice import target to cool prices that surged to a record in December as consumers and farmers hoarded supplies, said Badrul Hasan, director for procurement at the Directorate General of Food in Dhaka. The goal was raised to 1.2 million tons for the year to June 30 from 600,000 tons.

The Philippines may import as early as next month, although probably less than last year, Lito Banayo, the head of the National Food Authority, told reporters on Jan. 11.

“The trigger will be pulled when the Philippines’ orders start coming in,” said Mamadou Ciss, the chief executive officer of Singapore-based rice brokers Hermes Investments Pte, who correctly predicted in 2006 that prices would double. Thai
100 percent grade-B rice may jump 22 percent to $650, he said.

Production in Thailand, the world’s biggest exporter, will increase 0.4 percent to 20.35 million tons this year, according to USDA estimates. In Vietnam, the second-largest shipper, output will be little changed at 24.98 million, the data show.

Bottom line: it is only a matter of time before those rice futures pay off handsomely. As for the imminent food riots where they actually do matter – no problem. Just tell the Chinese to eat iPads and Eminis.

“There are so many reasons for prices to move up,” Dwight Roberts, president of the Houston-based U.S. Rice Producers Association, said by phone. “We sure are poised for a strong and upward movement in the market.”

Just like gold and silver are the last bastion for JP Morgan, so rice is the Rubicon for the Fed’s monetary policy. We urge everyone to keep a very close eye there…