To understand how far ordinary Chinese have been priced out of their country’s property market, you need to look not upwards at the Beijing’s shimmering high-rise skyline, but down, far below the bustling streets where nearly 20m people live and work. 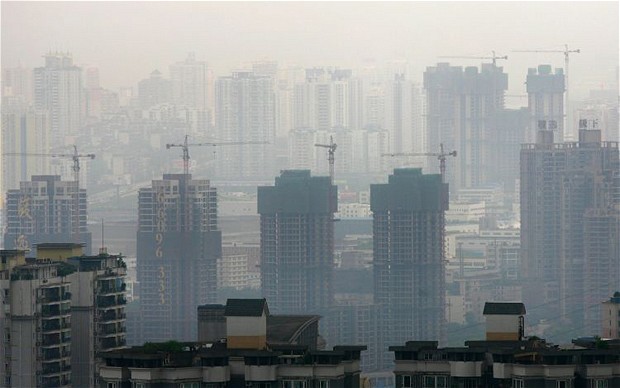 In Beijing, where the average monthly salary is 4,000 yuan, the average person would take 50 years to buy an average apartment, assuming they saved every penny they earned. Photo: Getty

There, in the city’s vast network of unused air defence bunkers, as many as a million people live in small, windowless rooms that rent for £30 to £50 a month, which is as much as many of the city’s army of migrant labourers can afford.

In a Beijing suburb, beneath one of the thousands of faceless residential tower blocks that have carpeted the city’s peripheries in a decade-long building frenzy, one of Beijing’s “bomb shelter hoteliers”, as they are known, agrees to show us his wares.

Passing under a green sign proclaiming “Air Defence Basement”, Mr Zhao leads us down two flights of stairs to the network of corridors and rooms that were designed to offer sanctuary in the event of war or disaster.

Beijing is estimated to have 30 square miles of tunnels and basements, some constructed after the Sino-Soviet split of 1969, when Mao’s China feared a Soviet missile strike, and many more constructed since to act as more modern emergency refuges.

The fact Mr Zhao can easily rent out 150 such rooms, with the connivance of the city’s Civil Defence Bureau with whom he has signed a five-year contract and invested nearly £150,000, is testament to China’s massive unfulfilled demand for affordable housing.

“Some 80pc of our tenants are girls working in the wholesale market and the rest are peddlers selling vegetables or running sidewalk snack booths,” he adds. “There are dozens of similar air defence basement projects in residential communities. In this area, they say 100,000 live underground.”

Checking out the price of property above ground it is not difficult to see why. To buy a small flat (860 sq ft) in the tower block above – a typically grim, grey concrete affair – currently costs more than £200,000. In a city where the average monthly salary is 4,000 yuan, the average person would take 50 years to buy such an apartment, assuming they saved every penny they earned.

At the market, Xiao Wang, a sales girl who is one of the basement dwellers, says she lives in a small basement room with a friend. They have no kitchen and only the use of a stinking public toilet upstairs.

“I can earn 4,000 yuan on a good month with commissions,” she says, “but sometimes it is only 2,000. I could maybe afford something a little better, but I need to save money so this is how I have to live.”

Such vast discrepancies between house prices and earnings are creating social and economic difficulties for China’s government – the discontented poor can’t find a decent place to live while the rich look to store their wealth in a speculative, bubble-prone property market. Not for nothing did Li Daokui, an adviser to China’s central bank, tell the World Economic Forum in Davos last week that rising property prices were the “biggest danger” to China’s economy.

With inflation and wage pressures also mounting, a growing number of investors are starting to question the long-term sustainability of China’s investment-heavy growth model. A survey of global investors by Bloomberg last week found that 45pc of them expect a financial crisis in China within the next five years, with another 40pc anticipating a crisis after 2016.

China’s government has given notice that it understands the risks of a property bubble, throwing another bucket of cold water on to the market last week, announcing new restrictions including minimum deposits on second homes of 60pc and a standing property tax in Shanghai and Chongqing.

However, many analysts remain sceptical that the curbs, allied to further interest rate rises expected this quarter, will do much more than stabilise prices which rose by 26pc in Shanghai and 12pc in Beijing last year despite an earlier round of cooling measures.

Goldman Sachs said it felt the impact of the curbs would be “short-lived” while Citigroup said the measures, while “harsh”, would not cause a sharp pullback in property prices, but at best would stop prices going up much further this year.

Those with a bearish outlook, such as Michael Pettis, professor of finance at Beijing’s Peking University, question whether China’s leaders will dare hit the brakes hard enough when so much of China’s economy relies on property investment to hit its politically sacrosanct annual growth targets.

Even last year’s soaring retail figures – sales of furniture rose by 37.2pc, household appliances by 27.7pc – appear to flatter the strength of China’s real economy, he argues in a note, since they are “as much an indication of soaring real estate investment as of rising consumption”.

Others point to the low level of mortgages on Chinese property and the underlying demand for property in a country that will urbanise 200m people in the next 20 years and argue that the bull market has a long way to run yet.

But for Beijing’s bunker residents who will never be able to afford a house, no matter how far prices fall, such considerations are superfluous, so long as China’s government does more to manage their rising discontent. This year, in a sign that it is getting serious about low-cost housing after years of paying lip-service, Beijing’s municipal government announced it was putting 200,000 new low-cost rental homes on the market, compared with 10,000 last year.

“We don’t ask for much,” said a roadside vegetable seller who also lives in a nearby basement shelter, “but the government must give us somewhere to live, because without us labourers what is going to support the Beijing economy?”