Comparing imagery of January arctic sea ice from 2009 to 2011 sourced from the U.S. Navy Polar Ice Prediction System, it appears as though the ice sheet has thickened substantially.

This observation is looking at ice thickness – not surface area – although some retreat of 1 meter ice can be seen in the Labrador Sea.

The ice thickness scale color, dark blue, corresponds to about 1.5 meters, or about 5 feet.

The color green represents about 3 meters, or about 10 feet.

The estimated area that has changed from dark blue to green measures approximately 500,000 square miles based on approximated Google Earth ruler measurements (1,500 miles length by a bit more than 300 miles width, on average – call it 333).

It’s getting colder out there!

(actually, we are well within a ‘La Nina’ cycle – cooling of the tropical Pacific Ocean surface)

An interesting ‘coincidence’ is that the magnetic north pole drift direction is nearly the same as the increase in ice sheet depth. 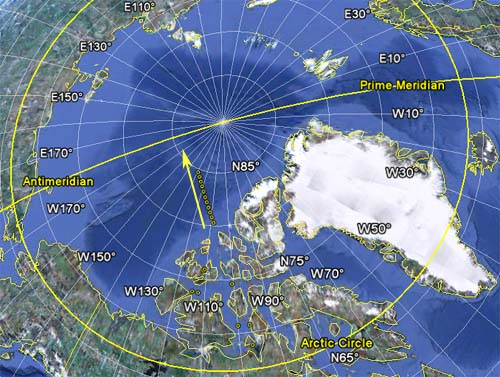 Update, Just for fun, I decided to also capture and loop 3 additional images – one each from Sep-2008, Sep-2009, Sep-2010, to see whether or not a similar apparent increase in ice thickness was visible during that time of year, similar to what is evident while comparing the January ‘winter’ images.

I took the liberty of circling the ‘green’ areas of each image, which represents ice thickness of about 10 feet and greater (3 meters +).

That’s my own interpretation with my eyes though – you be the judge.

Note: The curiosity to look at recent Arctic ice was born from this winter’s extra cold and precipitation in parts of the northern hemisphere – no attempts are made to calculate the overall sea ice change (globally, or in the entire northern hemisphere) or infer anything prior to 3 years. The January map loop shows slight reduction at southwest Greenland (Labrador Sea), some reduction in Hudson Bay, while some increase at northeast Greenland (Greenland Sea) – possibly an overall neutral effect there. The vast majority of apparent change is in the Arctic Ocean.