Yet even at these levels, this is still modest compared to countries like Spain, where the same metric was trending around 40% and is expected to remain there through 2011. 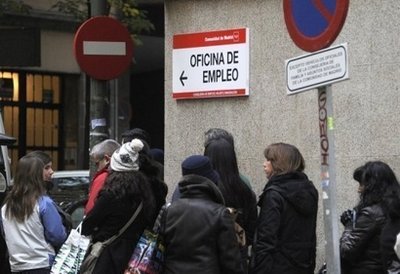 MADRID (AFP) – Spain announced Friday its jobless rate surged to a 13-year record above 20 percent at the end of 2010, the highest level in the industrialized world, as the economy struggled for air.

It was more bad news for an economy fighting to regain the trust of financial markets and avoid being trapped in a debt quagmire that has engulfed Greece and Ireland and now menaces Portugal.

Another 121,900 people joined Spain’s unemployment queues in the final quarter of the year, pushing the total to 4.697 million people, said the national statistics institute INE.

The resulting unemployment rate was 20.33 percent for the end of the year — easily exceeding Prime Minister Jose Luis Rodriguez Zapatero’s target of 19.4 percent.

Spain appears to be stuck in a rut of staggeringly high levels of unemployment.

The Spanish economy, the European Union’s fifth biggest, slumped into recession during the second half of 2008 as the global financial meltdown compounded the collapse of a labour-intensive construction boom

It emerged with tepid growth of just 0.1 percent in the first quarter of 2010 and 0.2 percent in the second but then stalled with zero growth in the third.

Zapatero has said the fourth quarter will show positive growth which would pick up steam in 2011 but he warned that job creation would be “far from what we need and desire. It will be slow and progressive.”

Last month the government announced it was scrapping a 426-euro ($568) monthly subsidy for the long-term unemployed so as to slash the public deficit and ease fears that it will need an EU bailout.

The government forecasts a 0.3-percent drop in growth this year will be followed by an expansion of 1.3 percent in 2011.

Madrid estimates 70 percent of the two million jobs which were lost in Spain since the start of the economic downturn were directly or indirectly related to the construction sector.

Spaniards see unemployment as Spain’s biggest problem and one in two, 49.8 percent, fear the jobless situation will get worse, a poll published by the CIS research firm this month showed.