The US government excludes food and energy from its worthless inflation data.

The US government’s inflation data is therefor pure deception and fraud.

Leading investor Jim Rogers has attacked the US government’s inflation data as a “sham” that is causing the central bank to massively understate price pressures. 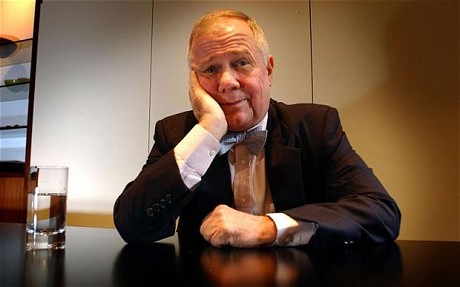 Jim Rogers expects interest rates in the US to go much higher over the next few years Photo: Clare Kendall

Mr Rogers, who shot to fame after co-founding Quantum Fund with George Soros, argued the Federal Reserve uses information that relies too heavily on housing prices.

“I expect interest rates in the US to go much, much, much higher over the next few years,” he said, adding that he is betting against US Treasuries.

The core personal consumption expenditure index, which strips out food and energy costs, is the Fed’s preferred measure of inflation. This was flat in October for the second straight month.

“Everybody in this room knows prices are going up for everything,” Mr Rogers told the Reuters Summit.

The investor remains bullish on commodities given the debt crises facing many country across the world.

Attacking the EU’s “bad economics” for “corroding the value of the euro”, Rogers painted a stark picture of the single currency’s future. “I don’t expect the euro to be around within 10 to 15 years,” he said, adding that the Chinese yuan is the most attractive currency today.