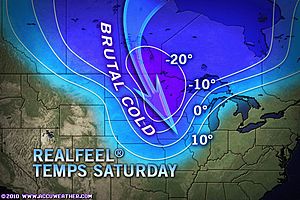 Dangerously cold air, perhaps the coldest of this entire winter season, is poised to invade the eastern half of the country over the next few days. In many places, if actual temperatures don’t fall below zero, brutal winds will make it feel that way with life-threatening conditions resulting. 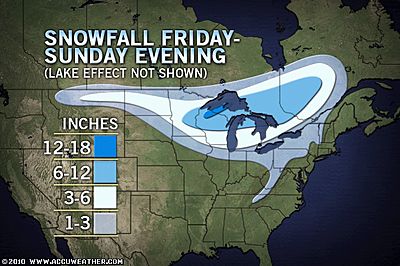 A major storm will bring heavy snow and strong winds to the Great Lakes and parts of the Midwest northeastward into portions of neighboring Canada this weekend.

Enough snow to shovel and plow will fall over this region, but the primary form of precipitation along the I-95 corridor will be drenching rain.

Travel in much of the region will be extremely dangerous especially as strong winds develop on the backside of the storm producing widespread blowing and drifting snow.

However, there are some forecast problems that remain with the storm, due to its complexity, track, dry air pockets, and changeover times in some locations from not only snow and ice to rain, but also back to snow and a freeze-up at the end.

Computer models Friday are starting to come into agreement that a swath of heavy snow will fall from eastern Minnesota through northern Michigan and into portions of central Ontario and Quebec, Canada. Many locations in this corridor are expected to receive 6 to 12 inches of snow from the storm itself, before a significant Lake Effect snow event begins on Sunday in the Great Lakes. However, any shift in the track will have drastic effects on who in the U.S. gets the lollipop of snow from the storm itself.

This map represents our latest thinking in terms of snowfall as of midday Friday. Keep in mind these amounts “do not” reflect lake effect snow which will tend to blend in to the rear of the storm.

Dry air pockets are another big concern. Along with the threat of areas of heavy, travel-stopping snow and blowing snow, the double-barreled storm may have more holes in it than a block of Swiss cheese.

That being said, if you have travel plans to or through Chicago, Indianapolis, Detroit, Cleveland, Columbus, Cincinnati, Buffalo, Pittsburgh, Toronto, or Ottawa this weekend on the ground or by air, expect problems from snow, wind, icy roads, and low visibility at times.

This includes the major interstate highways 70, 80 and 90 in the region.

As the storm intensifies upon tracking northeastward from the interior Northeast into neighboring parts of Canada later Sunday, high winds over the Great Lakes and Midwest will cause extensive blowing and drifting snow on the ground. For portions of this area, a blizzard is still in the cards.

Invading cold air behind the major storm will lead to wet areas becoming icy. This freeze-up will not only be a problem in the Midwest, but could reach all the way into the Tennessee Valley, southern Appalachians and the infamous I-95 Northeast megalopolis, according to Expert Senior Meteorologist Henry Margusity. 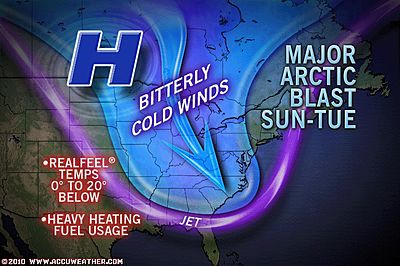 The coldest blast of the season so far and possibly the entire winter will sweep from the northern Plains and Great Lakes to the Atlantic Seaboard. This far reaching cold will make it all the way down to the Gulf Coast where freezing temperatures will affect portions of the Florida citrus crops.

Lake effect generated by this colder air and harsh winds will be nasty and crazy, leading to additional travel hardships, and could surpass the magnitude of those from earlier this week.

By far, the heaviest snow from the storm itself will hit areas of central Ontario and Quebec the hardest. This is where the secondary storm that forms over the mid-Atlantic will focus the brunt of its energy and moisture, weaning out pockets of dry air in the process.

Those pockets of dry air and snow “rip-off” will plague portions of the Midwest, eastern Great Lakes and central Appalachians.

In addition, rain or a wintry mix will fight to cut down on accumulations from the Ohio Valley to portions of the central Appalachians.