This is outrageous! This is education!

Bombard the government with emails and protest, so that these kids can eat what they have grown for lunch.

Those kids developed a connection with nature and that is priceless. Now let them also have the benefit from it. This is so important. There are already enough zombies out there.

The only good thing about this article is that some schools give the food to the kids to take it home with them.

Most school garden produce is forbidden fruit in CPS lunchrooms 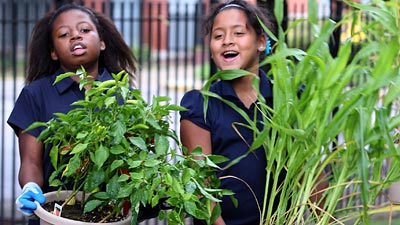 These urban oases, carefully tended by teachers, students and volunteers, range from several square feet to several acres of fruits, vegetables, herbs and flowers, and some schools even grow plants year-round in school greenhouses.

But one thing the more than 40 gardens have in common is that none of the produce ever finds its way into CPS lunchrooms. Instead, because of rules set by the district and its meal provider, the food is sold or given away.

The policies are in place despite the high obesity rate among Illinois children and experts’ concerns that young people are eating few fresh vegetables. Meanwhile, a studies suggest children eat and accept vegetables much more readily when they have helped grow them.

But in a district that touts its use of some local produce in the lunchroom, the most local of all remains forbidden fruit.

Kathleen Merrigan, deputy secretary of agriculture at the U.S. Department of Agriculture, recently toured a CPS school garden at the Academy for Global Citizenship on the Southwest Side. There, two second-grade girls showed her the eggplant, squash and tomatoes they grew, along with the chickens they kept for eggs.

“Ideally, all of those products would make it from the garden to the lunchroom,” Merrigan said.

But rules created by CPS and its meals supplier, Chartwells-Thompson, prevent that from happening.

“In order to use food in the school food program, it would need to meet specific/certified growing practices,” CPS spokeswoman Monique Bond said.

These requirements would include eliminating all “pesticides and insecticide” applications and using only “commercially prepared organic compost and fertilizers,” said Bob Bloomer, regional vice president of Chartwells-Thompson.

Commercial vendors, though, don’t have to abide by these rules. They can sell the district produce treated with several pesticides and grown in nonorganic fertilizer.

But produce grown by the Chicago High School for Agricultural Sciences on its 25-acre farm wouldn’t make the grade because, for example, it treats its corn with a single pesticide.

Instead, the high school ends up selling most of the bounty — including pumpkins, tomatoes, squash, greenhouse basil, farm-raised tilapia, fresh eggs and blueberries. Other schools give away the produce or send it home with kids.

Chef Greg Christian requested permission to serve school garden produce at Alcott Elementary School when he was running its Organic School Project, which ceased this year. But district administrators refused, on the grounds it wasn’t safe.

Chartwells said its guidelines are designed to protect students.

Other districts in the region and across the country are planning or have already launched garden-to-school programs. The key, organizers said, is getting support for healthy food and nutrition education straight from the top.

This year, Denver Public Schools students have already harvested more than 1,000 pounds of garden produce for school lunches as part of a program cooked up by school food service director Leo Lesh.

Working with chef Andrew Nowak, who is also an officer for the activist group Slow Food Denver, Lesh put out a call for interested schools with gardens last year.

“We asked them to grow mainly cherry tomatoes, cucumbers, peppers and squash for the salad bar,” he said.

In this first pilot year, 11 schools supplied up to 20 percent of their produce needs at the peak of the harvest, Nowak estimates. They also harvested and froze hundreds of pounds of pumpkin destined for cranberry-pumpkin breads.

“I can’t tell you how proud the kids were to pick vegetables at the beginning of the week and then see them on the salad bar a couple of days later,” said Nowak, who helped develop safety guidelines for the growing and handling of the food.

With Denver’s limited growing season and the gardens’ limited acreage, the program was never designed to replace the district’s produce vendors, Nowak said, but to augment the produce and “connect the kids to their food in a meaningful way.”

This month, Lesh said, he will write a check to pay for produce the schools harvested.

“I have to buy this anyway,” he said. “So why not give the money back to the district schools rather than somebody else?”

The gardens, planted and tended by adult volunteers and students, even provide green summer jobs to students who are willing to water and weed, Lesh said.

Closer to home, the Elgin-centered U-46 district, the second largest in the state, is developing a proposal to use up to 5 acres of city land for growing cafeteria produce and for teaching.

Though still in the planning and grant-writing stages, the program’s “ultimate goal is to let students experience the whole food cycle,” said Claudie Phillips, food service director for district U-46. “When kids are involved in the growing process and buy into the concept and see the end product, that’s when the whole thing works.”

Phillips said she is grateful for the support of district Superintendent Jose Torres. “It’s a dream to have the district head understand that healthier kids are better students and that food and nutrition can play a part,” she said.

Merrigan of the USDA said school gardens can help feed students’ minds, if not their bellies. She mentioned several recent studies on the topic, including one she co-authored with Michelle Ratcliffe, a doctoral student at Tufts University.

“She found that children who engaged in garden-based learning did better on their standardized test scores, were more environmentally aware and were willing to try and consume more fruits and vegetables, even beyond what they saw in the garden,” Merrigan said.

Chef David Blackmon, who oversees CPS career programs in hospitality, the culinary arts and agricultural science, said he believes he can bring the three disciplines together. Despite current regulations, he hopes to persuade the Chicago High School for Agricultural Sciences and Marshall High School to allow CPS culinary students to incorporate garden produce into special cafeteria offerings during the next school year.

“If a dish comes from the garden and it’s made by one of their friends,” Blackmon said, “I think the kids will be much more likely to try it over the same old pizza, nachos, burgers and chicken patties.”