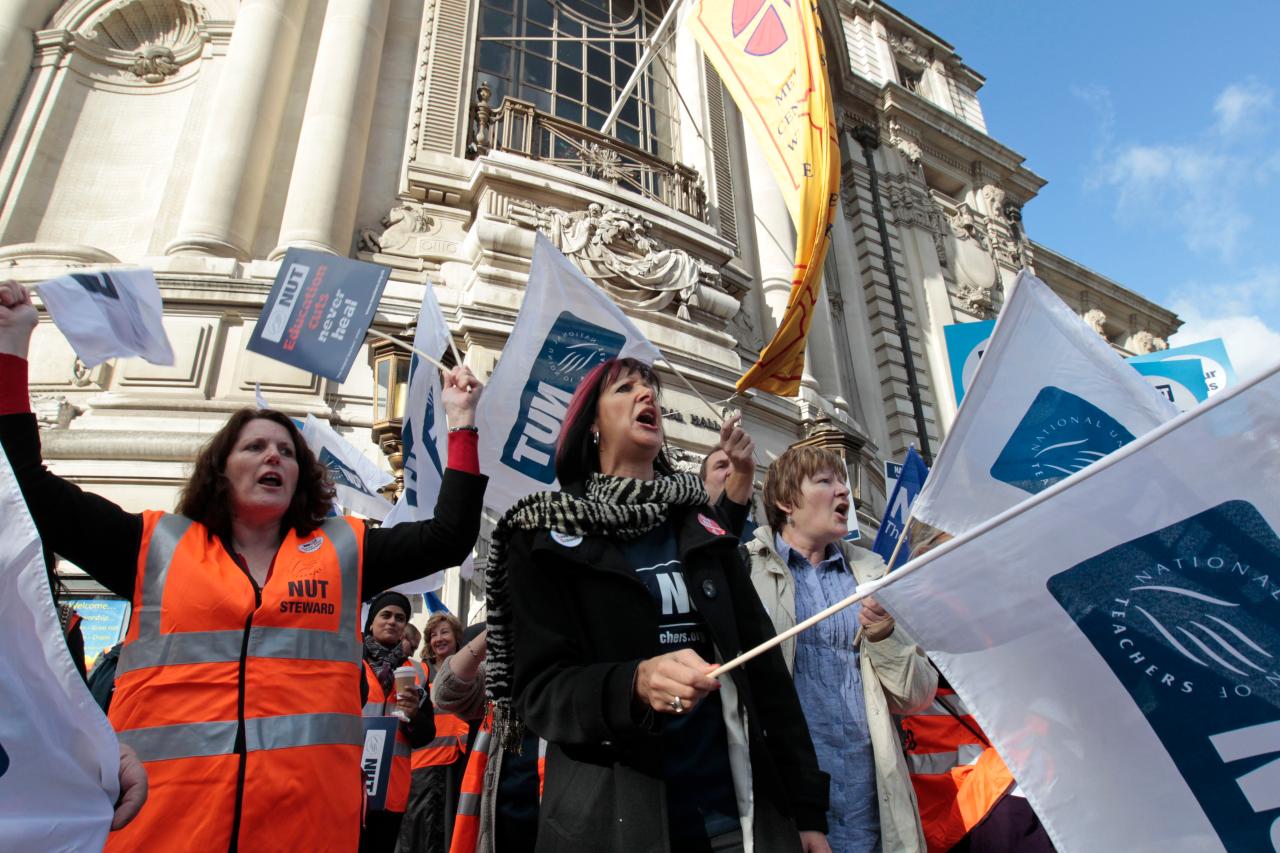 Members of workers’ unions chant slogans at a rally to protest the British government proposed cuts, in central London, Tuesday Oct. 19, 2010. Britain’s finance chief George Osborne is due to present a Comprehensive Spending Review to parliament on Wednesday Oct. 20, giving details of how the government propose to tackle the continuing financial deficit. AP Photo/Lefteris Pitarakis)

Osborne confirmed he had ordered 83 billion pounds ($130 billion) in spending cuts through 2015, which he claims are necessary along with tax increases to wipe out a spending deficit that reached 156 billion pounds last year.

As many as 500,000 public sector jobs will be lost, welfare payments sharply reduced and dozens of scheduled government programs halted. He said that even Queen Elizabeth II would take a hit, cutting her royal household budget by 14 percent over four years under the plans.

“It is a hard road, but it leads to a better future,” Osborne told lawmakers in a long anticipated statement to outline the coalition government’s long-term economic plans.

After spending billions bailing out indebted banks, and suffering a squeeze on tax revenue and a hike in welfare bills, he said it would take “time to turn around the debt supertanker.”

Osborne said that a temporary levy on bank balance sheets being introduced in January will be made permanent, potentially raising billions of pounds (dollars).

“We will extract the maximum sustainable taxes from the banking system,” he said.

He said the state pension age for men and women will reach 66 by the year 2020 — four years earlier than planned, potentially saving 5 billion pounds (US$7.8 billion) a year.

Osborne told lawmakers that cuts would fall in almost all areas of government spending.

The policing budget will fall by 4 percent each year, while the Justice Ministry must cut its budget by 6 percent per year.

But Osborne explained spending on tackling terrorism would be maintained to help Britain guard against al-Qaida and dissident Irish republicans, and to ensure the safety of the 2012 London summer Olympic Games.

Hundreds of London-based diplomats will lose their jobs under a 24 percent cut to the foreign ministry’s budget, while the British Broadcasting Corp. must take on the full costs of running the World Service — previously subsidized by the Foreign Office.

However, Britain will meet a U.N. target to spend 0.7 percent of gross domestic product on overseas aid by 2013 despite budget constraints.

“Britons can hold their heads up high and say even in these difficult times we will honor the promise we made to some of the poorest people in the world,” Osborne said.

Members of the public were watching anxiously for the details of Osborne’s plans. In the southern London district of Croydon, a group of seniors discussed the cuts at a government-funded community group.

The organization is already struggling with budget cuts. Eileen Dean, an 83-year-old retiree, worried what young and old alike will do if Osborne’s budget trimming forces it to close.

“The kids aren’t going to have anything to do, it’ll be back to playing football in the streets and breaking windows,” she said. “I might have to join them.”

Recent surveys and protests suggest many Britons are uneasy about the cuts. On Tuesday, hundreds of labor union members vowed to oppose Osborne’s plans, marching to Parliament in a noisy rally.