The coalition government faces the prospect of a referendum on Europe and the outbreak of political warfare between the Conservatives and Liberal Democrats after Nicolas Sarkozy and Angela Merkel demanded a new EU treaty within two years. 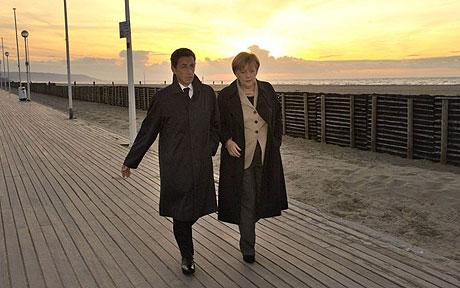 Nicholas Sarkozy and Angela Merkel walk at a beach in Deauville Photo: REUTERS

Following a meeting in France, the French President threw his weight behind calls from the German Chancellor for changes to the Lisbon Treaty in order to prevent future government debt crises threatening the euro zone.

The move is a serious setback for David Cameron because he has opposed any fresh EU institutional changes and recently renewed his “referendum lock” pledge to hold a popular vote on any future treaty that passes new powers to Brussels.

In a joint statement with Chancellor Merkel, President Sarkozy proposed revisions to the EU treaty in order to bring in tough sanctions against countries that threatened the euro’s stability by running high levels of government debt and to set up permanent EU bail-out fund.

“Germany and France together will put forward a revision to the treaties so that political sanctions can be made and for support mechanisms to be made ongoing in order to ensure the financial stability of the euro zone,” he said.

Britain has fought hard since March this year to block changes to the Lisbon Treaty by warning Germany and France that it would open the EU as a divisive political issue across Europe and that it could trigger a British referendum, almost certainly leading to a No vote.

The treaty change pact between France and Germany will put the Prime Minister on a collision course with Mr Sarkozy and Mrs Merkel at an EU summit on “economic governance” to be held in Brussels on Oct 28.

“This government will not accept any treaty revisions,” said a senior coalition source.

Mr Sarkozy’s change of heart, he has opposed a new treaty because he feared a referendum in France, tilts the balance in favour of another round of EU talks after years of bitter negotiations over the Lisbon Treaty, and its European Constitution predecessor, which was rejected by French voters in 2005.

Mr Cameron will come under strong pressure to hold a vote on the EU from many Tories, who were angry at Labour’s refusal to hold a referendum on the Lisbon Treaty and risks ending a political truce between Eurosceptic Conservatives and pro-European Liberal Democrats.

Many Tories would demand that the Conservative leader honour another promise by using the opportunity of treaty talks to take powers back from Brussels, a move that would be opposed by Nick Clegg, the pro-EU Liberal Democrat leader.

Mats Persson, the director of the Open Europe pressure group, said: “This is potentially a hugely significant development. The coalition will simply have to call a referendum should these new powers for the EU spill over to Britain. But this also represents an ideal opportunity for the UK to ask for powers back in return for allowing the eurozone to restructure, since the UK government will hold a veto over any treaty change.”

Britain is not a euro member, but it is a signatory to the Maastricht treaty that created the single European currency. Maastricht rules, carried over into the Lisbon Treaty, bans one euro member giving direct financial aid to another and falls short of direct sanctions, such as losing EU voting rights, against countries that break the rules

Treaty negotiations mean that any change in the union’s fundamental rules must be approved by all EU members in a new treaty.