An Israeli officer has been fined and sentenced to five months in jail for stealing from activists on board a Gaza-bound aid boat which was stormed by Israeli troops. 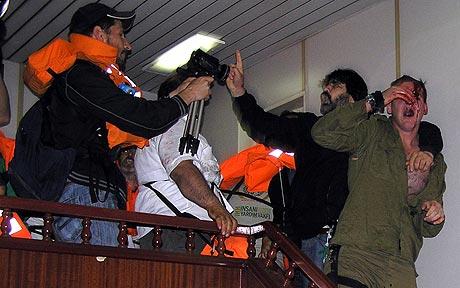 The raid on the Mavi Marmara Photo: AP

The soldier was given with a 700-shekel (£123) fine and demoted to private after being convicted of stealing laptops, photographic lenses and a compass from the Mavi Marmara.

Israeli forces stormed the ferry on May 31 in a raid which resulted in the deaths of nine Turkish activists and scores more people wounded as the ferry tried to run Israel’s blockade of the Gaza Strip.

At the time of the operation, there were more than 600 international activists on board, all of whom had their personal belongings confiscated before being deported.

The Israeli military could not immediately confirm details of the soldier’s sentence which was handed down by a military court.

The officer, who did not take part in the raid himself, had access to the six ships which made up the flotilla after they were taken to the Israeli port of Ashdod following their interception in international waters.

He then sold the equipment on to other soldiers.

The officer is the first of three soldiers facing trial on charges of theft from the flotilla passengers.

There has been a huge backlash against the Jewish state in the wake of the May 31 raid.

Israel says the soldiers fired in self-defence after they were attacked with clubs and knives, but activists claim the Israelis opened fire as soon as they rappelled from helicopters on to the Mavi Marmara’s upper deck.

–  Israel minister Isaac Herzog: ‘There is a whiff of fascism on the margins of Israeli society’ (AFP)