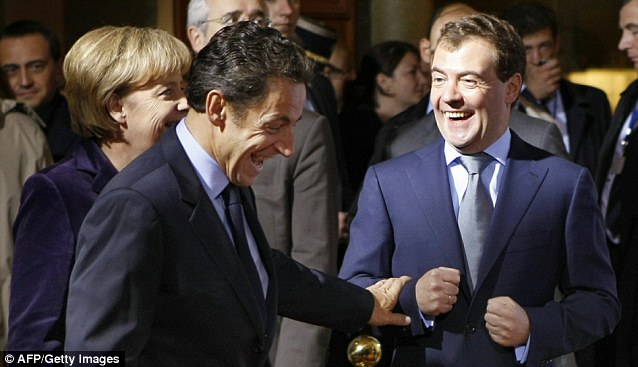 French President Nicolas Sarkozy has declared it his ‘duty’ to push through hugely unpopular reforms to the country’s pension system despite nationwide strikes and violent protests.

France is facing another day of chaos today as unions continue their demonstrations against the government’s plans.

The powerful CGT union has called for a second day of national strike action on Tuesday, with officials hoping as many as three million people will take to the streets to demonstrate against President Sarkozy’s proposals.

Protests across France have turned violent during the last six days, with train passengers and commuters facing huge delays as a result of the ongoing blockade of oil refineries.

Mr Sarkozy remains defiant, however, and announced during a press conference earlier that the blockades ‘cannot exist in a democracy’ where ‘there are people who want to work’. 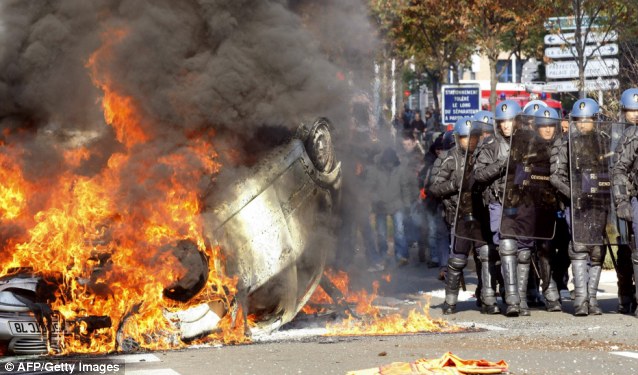 Violence: Police fired tear gas on protesters in Mulhouse and Montbelliard on Monday

On Tuesday half of all flights to Paris’s Orly airport were cancelled and 30 per cent of flights to other airports were affected.

A number of long-haul flights from the Charles De Gaulle airport in Paris have also had to refuel at Manchester due to the shortage in France.

A spokeswoman for Air France said a number of flights had been forced to take off from Paris with insufficient fuel to reach their destination, meaning they had to stop for new supplies en route.

The train operator SNCF said it hoped to run 60 per cent of trains today, with the local trains and the Metro in Paris expected to still run.

The disruption to transport is a result of the week-long blockade of France’s 12 oil refineries.

The protest has led to one in four petrol stations running dry and oil company Exxon Mobil saying the situation has now turned ‘critical’.

In total there are estimated to be 2,500 petrol stations without any fuel.

The country has been hit by massive protests in the last week as a result of the plans to raise the retirement age from 60 to 62 and the full state pension age from 65 to 67.

A huge march through Paris is planned for later today, following the success of a similar event last week which attracted a reported 3.5 million people.

US economist Joseph Stiglitz has said American and British citizens should follow the French example and stage protests against planned spending cuts and welfare reforms.

On Monday violence broke out across the country, with the police making hundreds of arrests.

In Mulhouse and Montbelliard officers fired teargas at protesters to break up demonstrations.

In the early hours of Tuesday, a school in Le Mans, northwest France, also burned down after an apparent arson attack, according to the Reuters news agency, but it remains unclear if the incident was linked to the protests.

The hugely unpopular pension reform has already been approved by the National Assembly, France’s lower house.

However the crucial vote by the Senate, originally planned for tomorrow, has been delayed until Thursday.

Many in France fear a re-run of the May 1968 riots in Paris when thousands took to the streets to try to bring down the government of President Charles de Gaulle.

Appealing for calm, French justice minister Michele Alliot-Marie warned protesters that ‘the right to demonstrate does not mean the right to smash things up’.

Mr Sarkozy, who is meeting German and Russian politicians in the northern seaside town of Deauville today, though remains defiant.

‘The reform is essential and France is committed to it and will go ahead with it just as our German partners did,’ the French president said.