A third baby died after receiving a BCG shot in Ghaziabad:

LUCKNOW: Death of infants in Ghaziabad and that of a newborn in Ghazipur district kept the health department officials on their toes on Thursday. All three deaths were linked with vaccination. While a newborn died within 24 hours of receiving BCG shot in Ghazipur, twin-sisters died in Ghaziabad after getting measles vaccines at a private nursing home.

Director general, medical health, Dr SP Ram maintains that health department is answerable in connection with the incident in Ghazipur. In this regard, he said, “prima facie it does not appear to be a case of adverse event following vaccination. Still, I have asked the chief medical officer of the district to submit a report in this regard.” About the mishap in Ghaziabad, he said, “this did not happen in a government health sector so what can I say about it.”

– 3 Babies Die Within Hours After They Were Vaccinated:

BANGLADESH – Three babies died within hours after they were vaccinated against measles under Expanded Programme of Immunisation (EPI) at Kalikapur Community Health Clinic of Guabaria union in the district’s Hizla upazila early yesterday. 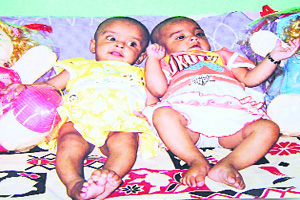 Sunil Sharma can’t believe his twin daughters Avika and Anika are no more. The textile merchant from Ghaziabad had never imagined that a measles vaccine at a private nursing home in the town would take the life of the his nine-month-old daughters.

Sunil claims his daughters died minutes after being administered the vaccine, usually given when a baby is nine months old, at Divya Nursing Home. Akhil Sharma, an uncle of the twins, said: “I took them for the vaccination around 6 pm on Wednesday. They were given the vaccination around 7.15 pm. In 15 minutes, the children started breathing heavily. We rushed to the doctor who gave them oxygen. But the babies had died by them. Still Dr Satyaveer Singh referred them to Sarvodya Hospital.”

“My wife fainted on hearing about the death of our daughters. She could not believe the news,” said Sunil, who stays in Swarnjayanti Puram.

The family soon gathered at the hospital and sought an explanation. When the doctors failed to provide a satisfactory explanation for the deaths, they lodged a complaint. The Ghaziabad police have registered an FIR at the Kavi Nagar police station against Dr Satyaveer Singh under Section 304 of the IPC for culpable homicide not amounting to murder.

“I have given orders to seal the hospital and take samples of the vaccine. The doctor is absconding. We have approached the Chief Medical Officer to probe the incident,” said SSP Raghubir Lal. CMO A K Dhawan said he cannot comment on whether the vaccine caused the deaths as a probe is on into the incident.

The Indian Medical Association’s local president Dr Santosh Aggrawal, who visited the hospital after the incident, confirmed that the health of the twins deteriorated after being administered the vaccine. “The doctor had a fresh supply of the vaccine. Still there could be something wrong with the batch of vaccines. Similar deaths have been reported from Kanpur and Lucknow,” he added.