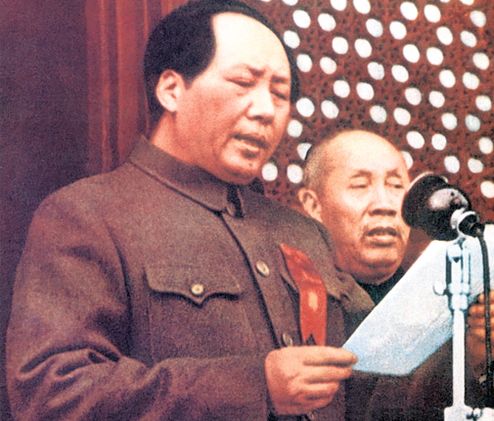 Mao Zedong, founder of the People’s Republic of China, qualifies as the greatest mass murderer in world history, an expert who had unprecedented access to official Communist Party archives said yesterday.

Speaking at The Independent Woodstock Literary Festival, Frank Dikötter, a Hong Kong-based historian, said he found that during the time that Mao was enforcing the Great Leap Forward in 1958, in an effort to catch up with the economy of the Western world, he was responsible for overseeing “one of the worst catastrophes the world has ever known”.

Mr Dikötter, who has been studying Chinese rural history from 1958 to 1962, when the nation was facing a famine, compared the systematic torture, brutality, starvation and killing of Chinese peasants to the Second World War in its magnitude. At least 45 million people were worked, starved or beaten to death in China over these four years; the worldwide death toll of the Second World War was 55 million.

Mr Dikötter is the only author to have delved into the Chinese archives since they were reopened four years ago. He argued that this devastating period of history – which has until now remained hidden – has international resonance. “It ranks alongside the gulags and the Holocaust as one of the three greatest events of the 20th century…. It was like [the Cambodian communist dictator] Pol Pot’s genocide multiplied 20 times over,” he said.

Between 1958 and 1962, a war raged between the peasants and the state; it was a period when a third of all homes in China were destroyed to produce fertiliser and when the nation descended into famine and starvation, Mr Dikötter said.

His book, Mao’s Great Famine; The Story of China’s Most Devastating Catastrophe, reveals that while this is a part of history that has been “quite forgotten” in the official memory of the People’s Republic of China, there was a “staggering degree of violence” that was, remarkably, carefully catalogued in Public Security Bureau reports, which featured among the provincial archives he studied. In them, he found that the members of the rural farming communities were seen by the Party merely as “digits”, or a faceless workforce. For those who committed any acts of disobedience, however minor, the punishments were huge.

State retribution for tiny thefts, such as stealing a potato, even by a child, would include being tied up and thrown into a pond; parents were forced to bury their children alive or were doused in excrement and urine, others were set alight, or had a nose or ear cut off. One record shows how a man was branded with hot metal. People were forced to work naked in the middle of winter; 80 per cent of all the villagers in one region of a quarter of a million Chinese were banned from the official canteen because they were too old or ill to be effective workers, so were deliberately starved to death.

Mr Dikötter said that he was once again examining the Party’s archives for his next book, The Tragedy of Liberation, which will deal with the bloody advent of Communism in China from 1944 to 1957.

He said the archives were already illuminating the extent of the atrocities of the period; one piece of evidence revealed that 13,000 opponents of the new regime were killed in one region alone, in just three weeks. “We know the outline of what went on but I will be looking into precisely what happened in this period, how it happened, and the human experiences behind the history,” he said.

Mr Dikötter, who teaches at the University of Hong Kong, said while it was difficult for any historian in China to write books that are critical of Mao, he felt he could not collude with the “conspiracy of silence” in what the Chinese rural community had suffered in recent history.