A secretive Russian government agency has reserved a batch of internet domain names for Vladimir Putin, the prime minister, in a move which strongly suggests he is planning a return to the presidency in 2012. 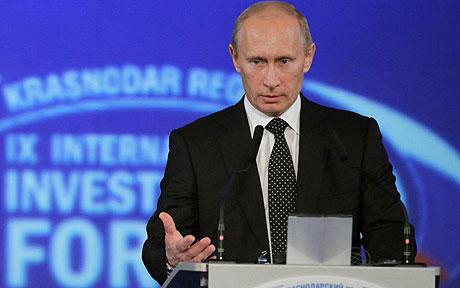 The move strongly suggests Vladimir Putin is planning a return to the presidency in 2012 Photo: EPA

Russia’s Federal Protection Service, an elite government agency that traces its roots back to the Soviet KGB, reserved twenty two Russian-language internet domain names in late August for the 57-year-old former KGB spy including the Cyrillic equivalent of Putin-2012.rf and Putin2012.rf.

The move fuelled speculation that Mr Putin is planning to contest a presidential election in 2012 which opinion polls show he would be sure to win. The Russian prime minister has stopped short of saying he will definitely return to a job that he did for eight years from 2000-2008 but has made it clear he wants to continue to play a frontline role in national politics.

Many analysts believe he has already begun his election campaign in order to prepare public opinion for a comeback even though, in the eyes of many Russians, he never left. Indeed, Mr Putin spent the summer burnishing his macho man-of-action credentials hanging out with bikers, piloting a fire fighting plane, and completing a rugged road trip across Russia’s Far East.

By contrast, President Dmitry Medvedev, the loyalist Mr Putin handpicked to succeed him in 2008, has looked more like a sedentary Soviet-style bureaucrat. However, Mr Putin’s spokesman strongly denied the move to reserve the internet domain names for Mr Putin meant his boss would definitely run for president in 2012. He said it was merely a measure to prevent ill-wishers abusing the domain names for malicious purposes.

Seven domain names containing the word Medvedev were also registered but none of those contained the 2012 date.

Russian-language internet domains were introduced for the first time earlier this year in an attempt to offset the dominance of the English language online.