More information about ‘Pedophile’s Paradise’ (=The Catholic Church) at the end of the following article.

How on earth is it possible that such criminals can get away with all these horrible crimes?

What would happen if an ordinary citizen would commit them?

Catholics, it’s you this Pope has abused 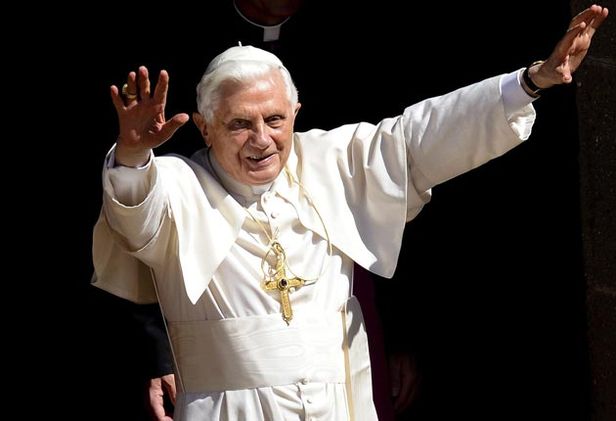 The Pope will visit the UK next week (The fingers of his hands form a ‘M’ for Mason.)

Some people think Ratzinger’s critics are holding him responsible for acts that were carried out before he became Pope, simply because he is the head of the institution involved. This is an error. For over 25 years, Ratzinger was personally in charge of the Congregation for the Doctrine of the Faith, the part of the Vatican responsible for enforcing Catholic canonical law across the world, including on sexual abuse. He is a notorious micro-manager who, it is said, insisted every salient document cross his desk. Hans Küng, a former friend of Ratzinger’s, says: “No one in the whole of the Catholic Church knew as much about abuse cases as this Pope.”

We know what the methods of the church were during this period. When it was discovered that a child had been raped by a priest, the church swore everybody involved to secrecy, and moved the priest on to another parish. When he raped more children, they too were sworn to secrecy, and he was moved on to another parish. And on, and on. Over 10,000 people have come forward to say they were raped as part of this misery-go-round. The church insisted all cases be kept from the police and dealt with by their own “canon” law – which can only “punish” child rapists to prayer or penitence or, on rare occasions, defrocking.

Ratzinger was at the heart of this. He refuses to let any police officer see the Vatican’s documentation, even now, but honourable Catholics have leaked some of them anyway. We know what he did. We have the paper trail. Here are three examples.

In Germany in the early 1980s, Father Peter Hullermann was moved to a diocese run by Ratzinger. He had already been accused of raping three boys. Ratzinger didn’t go to the police, instead Hullermann was referred for “counselling”. The psychiatrist who saw him, Werner Huth, told the Church unequivocally that he was “untreatable [and] must never be allowed to work with children again”. Yet he kept being moved from parish to parish, even after a sex crime conviction in 1986. He was last accused of sexual abuse in 1998.

In the US in 1985, a group of American bishops wrote to Ratzinger begging him to defrock a priest called Father Stephen Kiesle, who had tied up and molested two young boys in a rectory. Ratzinger refused for years, explaining that he was thinking of the “good of the universal Church” and of the “detriment that granting the dispensation can provoke among the community of Christ’s faithful, particularly considering the young age” of the priest involved. He was 38. He went on to rape many more children. Think about what Ratzinger’s statement reveals. Ratzinger thinks the “good of the universal Church” – your church – lies not in protecting your children from being raped, but in protecting the rapists from punishment.

In 1996, the Archbishop of Milwaukee appealed to Ratzinger to defrock Father Lawrence C Murphy, who had raped and tortured up to 200 deaf and mute children at a Catholic boarding school. His rapes often began in the confessional. Ratzinger never replied. Eight months later, there was a secret canonical “trial” – but Murphy wrote to Ratzinger saying he was ill, so it was cancelled. Ratzinger advised him to take a “spiritual retreat”. He died years later, unpunished.

These are only the cases that have leaked out. Who knows what remains in the closed files? In 2001, Ratzinger wrote to every bishop in the world, telling them allegations of abuse must be dealt with “in absolute secrecy… completely suppressed by perpetual silence”. That year, the Vatican actually lauded Bishop Pierre Pican for refusing to inform the local French police about a paedophile priest, telling him: “I congratulate you for not denouncing a priest to the civil administration.” The commendation was copied to all bishops.

Once the evidence of an international conspiracy to cover up abuse became incontrovertible to any reasonable observer, Ratzinger’s defenders shifted tack, and said he was sorry and would change his behaviour. But this June, the Belgian police told the Catholic Church they could no longer “investigate” child rape on Belgian soil internally, and seized their documents relating to child abuse. If Ratzinger was repentant, he would surely have congratulated them. He did the opposite. He called them “deplorable”, and his spokesman said: “There is no precedent for this, not even under communist regimes.” He still thinks the law doesn’t apply to his institution. When Ratzinger issued supposedly ground-breaking new rules against paedophilia earlier this year, he put it on a par with… ordaining women as priests.

There are people who will tell you that these criticisms of Ratzinger are “anti-Catholic”. What could be more anti-Catholic than to cheer the man who facilitated the rape of your children? What could be more pro-Catholic than to try to bring him to justice? This is only one of Ratzinger’s crimes. When he visited Africa in March 2009, he said that condoms “increase the problem” of HIV/Aids. His defenders say he is simply preaching abstinence outside marriage and monogamy within it, so if people are following his advice they can’t contract HIV – but in order to reinforce the first part of his message, he spreads overt lies claiming condoms don’t work. In a church in Congo, I watched as a Catholic priest said condoms contain “tiny holes” that “help” the HIV virus – not an unusual event. Meanwhile, Ratzinger calls consensual gay sex “evil”, and has been at the forefront of trying to prevent laws that establish basic rights for gay people, especially in Latin America.

I know that for many British Catholics, their faith makes them think of something warm and good and kind – a beloved grandmother, or the gentler sayings of Jesus. That is not what Ratzinger stands for. If you turn out to celebrate him, you will be understood as endorsing his crimes and his cruelties. If your faith pulls you towards him rather than his victims, shouldn’t that make you think again about your faith? Doesn’t it suggest that faith in fact distorts your moral faculties?

I know it may cause you pain to acknowledge this. But it is nothing compared to the pain of a child raped by his priest, or a woman infected with HIV because Ratzinger said condoms make Aids worse, or a gay person stripped of basic legal protections. You have a choice during this state visit: stand with Ratzinger, or stand with his Catholic victims. Which side, do you think, would be chosen by the Nazarene carpenter you find on your crucifixes? I suspect he would want Ratzinger to be greeted with an empty, repulsed silence, broken only by cries for justice – and the low approaching wail of a police siren.

2 thoughts on “Catholics, It’s You This Freemason-Satanist Pope Has Abused”