Afghanistan should be allowed to partition along ethnic lines by pulling back Nato forces and acknowledging that the Taliban will not be defeated in their heartland, a senior former American national security adviser has warned. 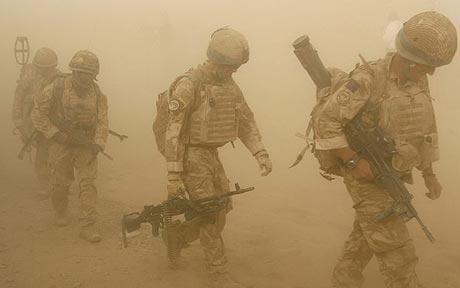 Robert Blackwill said that there had been a decade of ‘innumerable errors’ in the Western approach to Afghanistan Photo: REUTERS

Robert Blackwill, who was Condolezza Rice’s deputy as National Security Adviser in 2003 to 2004, will use a speech at the International Institute of Strategic Studies think tank in London on Monday to call on President Barack Obama to make drastratic changes in the war’s objectives.

He told The Daily Telegraph that the surge of forces launched last year to stabilise Afghanistan was “high likely” to fail and that the death toll in the conflict was too high a price to pay.“The Taliban are winning, we are losing,” he said. “They have high morale and want to continue the insurgency. Plan A is going to fail. We need a Plan B

“Let the Taliban control the Pashtun south and east, the American and allied price for preventing that is far too high.”

Mr Blackwill said that there had been a decade of “innumerable errors” in the Western approach to Afghanistan. Most notably American policy shifted after the atttacks on September 11, 2001 from expelling al Qaeda from its Afghan sanctuaries to crushing the Taliban and installing a democratic government in Kabul.

The result was that America now had 1,000 soldiers deployed for every one of the estimated 100 al Qaeda operatives now believed to be based in Afghanistan and was hemorraging $100 billion a year on the conflict.

A review of the Afghan war that Mr Obama will present to the US public in November, represents an opportunity to change the contours of the conflict. The US committed an extra 35,000 troops to Afghanistan in attempt to reverse Taliban gains.

Mr Blackwill believes the US should only seek to defend those areas dominated by Afghanistan’s Tajik, Uzbek and Hazara minorities by pulling out of bases in the south.

By accepting that the Taliban would overrun Kandahar and other big population centres, the US would threaten the Taliban only if it allowed al Qa’eda to reform or if the movement started to encroach northwards.

“How many people really believe that Kandahar is central to Western civilisation. We did not got to Afghanistan to control Kandahar ,” he said.

“Our preference at the time of the attack was for the Taliban to give up al Qaeda not to change the regime. Mr Obama himself and the administration say what we are trying to do in Afghanistan is to destroy al Qaeda.”

Alongside misdirected strategy, the “utter corruption” of the government of President Hamid Karzai had eclipsed Nato’s hopes to keeping the Taliban at bay after its defeat in late 2001.

In contrast to Mr Blackwill’s view that Afghanistan’s army and police could not be made ready to control the whole country, Liam Fox, the Defence Secretary, said the forces would assume responsibility by 2015.

“If we were to leave before 2015, a point at which on current progress we expect to have achieved our security aims, it would be a shot in the arm to violent jihadists everywhere, re-energising violent radical and extremist Islamists,” he said.

“It would send a signal that we did not have the moral resolve and the political fortitude to see through what we ourselves have described as national security imperative.”

– The Truth About Afghanistan: ‘We’re f***ing losing this thing.’

– German President Horst Köhler had to resign for telling the truth (!)

– Afghans Are Convinced That The US Is Funding The Taliban

– Taliban get £1,600 bounty for each Nato soldier killed