All these soldiers could be still alive …

The number of US soldiers killed in the Afghan war in 2010 is the highest annual toll since the conflict began almost nine years ago. 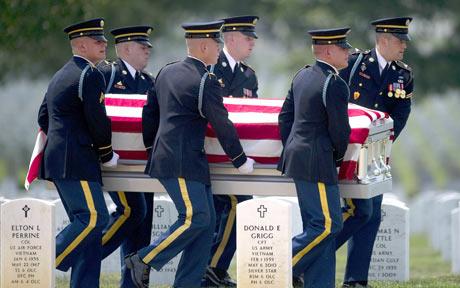 A total of 323 US soldiers have been killed in the Afghan war this year, compared to 317 for all of 2009, according to figures based on the independent icasualties.org website.

Foreign forces suffered a grim spike in deaths last month as the Taliban insurgency intensified, with NATO confirming on Wednesday that a sixth US soldier was killed on one of the bloodiest days this year.

At 490, the overall death toll for foreign troops for the first eight months of the year is rapidly closing in the number registered in all of 2009, which at 521 was a record since the start of the war in late 2001.

In all 1,270 American troops have lost their lives, out of 2,058 foreign military fatalities, since the conflict began with the US-led invasion of Afghanistan following the September 11 attacks on New York and Washington in 2001.

US President Barack Obama on Tuesday warned that the United States faced a “very tough fight” in Afghanistan, with more casualties and “heartbreak” to come.

“We obviously still have a very tough fight in Afghanistan,” Mr Obama told troops in Texas as the United States marked the formal end of combat operations in Iraq.

“We have seen casualties go up because we are taking the fight to al-Qaeda and the Taliban,” Obama said. “It is going to be a tough slog.”

Military leaders say the spike in deaths reflects the injection of additional troops into the Afghan theatre, which leads to a higher number of battlefield engagements with Taliban-led insurgents.

US General David Petraeus, the commander of US and NATO forces in Afghanistan, said Tuesday that deployments would reach their full strength of 150,000 within days.

In recent months Taliban improvised explosive devices (IEDs) have become the biggest killers of US and NATO troops as the insurgents adapt their battlefield techniques to counter Western forces’ heavier armour.

IEDs are easy and cheap to produce, often using ammonium nitrate fertiliser produced in Pakistan and trucked across the border into Afghanistan, officials say. The bombs are difficult to detect, often buried by roadsides and remotely detonated to devastating effect.

A UN report in June noted an “alarming” 94 percent increase in IED incidents in the first four months of this year compared to 2009.

Washington said in July that it was supplying an additional three billion dollars worth of equipment – and about 1,000 experts – to counter the Taliban’s expertise in making IEDs.

In the latest incident NATO’s International Security Assistance Force (ISAF) confirmed that a sixth US soldier died on Tuesday, killed in an insurgent attack in the Taliban heartland in the south of the country.

This followed the previously announced deaths on Tuesday of another five US soldiers, four of them killed in a roadside bomb attack.

On Monday, eight NATO troops – seven Americans and an Estonian – were killed in bomb attacks in southern Afghanistan.

Twenty-five Americans have died since Friday.

Icasualties.org is constantly updating its figures as soldiers wounded in battle die of their injuries after they have been evacuated from Afghanistan, sometimes days or weeks later.