A private television station in Mozambique says six people have been killed as police shoot at protesters. 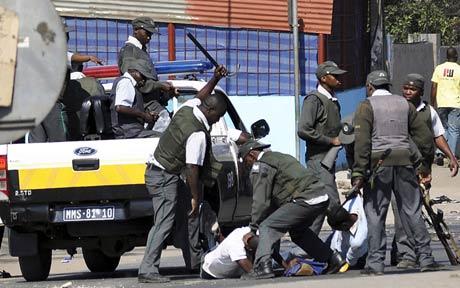 Police officers arrest protesters during a rally in the neighbourhood of Benfica, in the suburbs of Maputo, Mozambique Photo: EPA 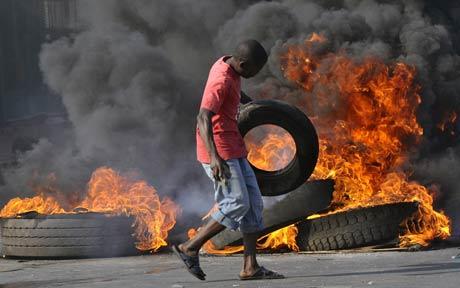 A demonstrator throws a tyre on to a burning barricade during riots in Mozambique’s capital Maputo Photo: REUTERS

The S-TV station says the dead included one child. The station gave few other details. Police could not immediately confirm the report.

Police opened fire Wednesday on stone-throwing crowds who were protesting rising prices in this impoverished country.

Mozambicans have seen the price of a loaf of bread rise by 25 percent, from four to five meticais (from about 11 cents to about 13 U.S. cents) in the past year. Fuel and water prices also have risen.

Protests over high prices erupted into violence in Mozambique in 2008.

Security forces have made arrests and are looking for the people who sent out the original text messages calling for the strike, police spokesman Arnaldo Chefo said in an interview in the city today.

“Our efforts are to stop the strike and we have mobilized all our resources to control it,” he said. “We do not know who is organizing it, but we are trying to identify the strike leaders or organizers.”

The government plans to raise water and electricity rates by 30 percent today and the price of bread by 25 percent on Sept 6.

Schools and shops have been ordered to close as a security measure, Mr Chefo said. The organizers of the strike had not applied for permission in line with laws in the southern African country.

The television channel showed images of police throwing tear gas and said a person had died while some people, including police officers, have been admitted to hospitals with injuries.

2 thoughts on “Food Riots In Mozambique, Six People Killed – Government To Raise Water And Electricity Prices By 30 Percent And Price Of Bread By 25 Percent”