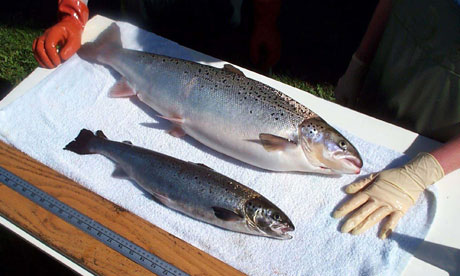 A genetically-modified AquAdvantage salmon, top, next to a control salmon of the same age. (AP)

US authorities today began the process to approve the first GM animal for human consumption.

The Food and Drug Administration (FDA) announced a 60-day period of consultation and public meetings over whether to permit a GM strain of salmon to be eaten by humans, even though it has been called a “frankenfish” by critics. The approval process could take less than a year, and if it gets the green light the fish could be on the market in 18 months.

Environmentalists and scientists see the decision as marking a threshold. If it is approved it is likely to open the door to a large range of GM animals being raised for consumption. If not, scientists say that will have a negative effect on research, in part because there will be no money to be made from it.

The AquAdvantage salmon – a modified North Atlantic salmon – has been created by AquaBounty Technologies in Boston, Massachusetts, over 14 years at a cost of $50m. The company says the salmon grows at twice the speed of similar fish, cutting costs for farmers and greatly increasing production.

On its website the company says: “This advancement provides a compelling economic benefit to farmers (reduced growing cycle) as well as enhancing the economic viability of inland operations, thereby diminishing the need for ocean pens.” The fish are also sterile, which the company says would prevent interbreeding with wild salmon.

The genetic modification involves taking a growth hormone gene from a chinook salmon and joining it with a control DNA sequence (called a promoter) from an ocean pout – an eel-like creature from a different family of marine organisms. The growth hormone gene is almost identical to the equivalent gene in the North Atlantic salmon – the sequence differs by just 1% – but it operates differently because of the new control sequence. Unlike in North Atlantic salmon, which produced growth hormone only in the summer, ocean pout control sequence directs the gene to produce hormone all year round.

The genetic mash-up is then injected into the eggs of North Atlantic salmon. Here, it is taken up by the fish’s genome and ultimately the DNA is present in cells throughout the body of the fish. The company uses a different genetic trick to make the fish it proposes to sell to customers sterile to prevent them interbreeding.

The explanation of the genetic modification on the company’s publicity literature, aimed at reassuring the public, makes no mention of the ocean pout gene. “The chinook growth hormone is the same as the Atlantic salmon growth hormone; it is simply regulated differently. Their ability to grow faster does not change the biological make-up of the fish,” the company says.

That appears to contradict the explanation of the technology from AquaBounty’s chief scientific officer, Dr John Buchanan, who said the fish do incorporate DNA from the ocean pout. But he said there was no intention to mislead. “I don’t think it is intentionally hidden. It has been disclosed many times and published in papers,” he said, adding that the description on the website had been simplified to make it less confusing.

Because it is new ground for the FDA there are no regulations about genetically engineered animals and so it is being evaluated as if it were an animal treated with drugs.

The FDA has established an advisory committee of veterinarians to consider the evidence and public views. A public meeting will be held next month.

Among the opponents is the International Salmon Farmers Association which is concerned about the reaction of consumers and that it will undermine the popularity of salmon, which commands high prices in the US.

However, the National Fisheries Institute, a trade association of American seafood producers, backs “the use of biotechnology in the production of genetically-engineered fish” provided it has FDA approval.

If the FDA approves the fish for human consumption, AquaBounty says they will be raised in inland waters to ensure the modified salmon do not enter the oceans.

2 thoughts on “US: GM Salmon May Go On Sale”