… and the stench is already unbearable.

Wonder where all those TRILLIONS of dollars really went and for what reasons all these soldiers had to die?

Remember that Donald Rumsfeld admitted the day before 9/11 on CBS NEWS that the Pentagon Cannot Account For 2,3 TRILLION Dollars ???

After these elite criminals will have bankrupted and destroyed America they will propose the New World Order as the one and only solution to all the problems that they have created in the first place. 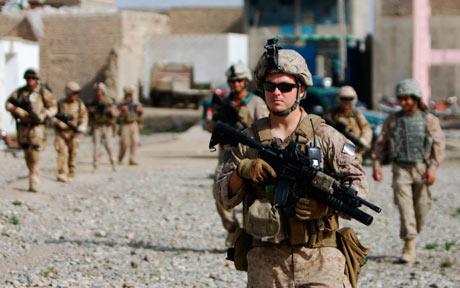 The three-page document addressed the hypothetical question of the impact on the United States if Americans were found to be operating abroad to carry out acts of terrorism.

The CIA memo, produced by the agency’s Red Cell ‘think tank’ set up after the September 11 attacks, does not appear to expose any state secrets and was dismissed by one government official as hardly a “blockbuster.”

It is the latest classified memo to be published by the whistle-blowing website, which last month released more than 70,000 secret military documents on the allied war in Afghanistan, prompting an FBI investigation.

It has threatened to release some 15,000 more, despite criticism that the leaks endangered the lives of sources and exposed sensitive intelligence gathering methods to enemy fighters.

The latest memo said the United States could lose leverage over allies to co-operate on terrorism, particularly on “extra-judicial activities”.

“Primarily we have been concerned about al Qaeda infiltrating operatives into the United States to conduct terrorist attacks, but AQ may be increasingly looking for Americans to operate overseas,” the document proposes.

“Undoubtedly al Qaeda and other terrorist groups recognise that Americans can be great assets in terrorist operations overseas.”

It said US citizens are valuable to terrorist organisations because they are harder to detect. They don’t fit the typical Arab-Muslim profile and can easily communicate with leaders through their “unfettered” access to the internet and other methods, the report said.

The report cited cases of Americans involved in alleged plots in Pakistan, India and elsewhere and said “contrary to common belief, the American export of terrorism or terrorists is not a recent phenomenon.”

The CIA played down the paper’s significance, noting Red Cell teams of analysts were tasked with taking up hypothetical scenarios and presenting alternate views, divergent from mainstream thinking.

“These sorts of analytic products – clearly identified as coming from the Agency’s ‘Red Cell’ – are designed simply to provoke thought and present different points of view,” said spokesman George Little.

It said the United States had a certain amount of leverage with allies on extradition requests following the Sept. 11, 2001, attacks, but warned that could change.

“If the US were seen as an ‘exporter of terrorism,’ foreign governments could request a reciprocal arrangement that would impact US sovereignty,” it said.

It said foreign governments could request information on U.S. citizens or request their “rendition,” or the secret, extra-judicial transfer of a terrorism suspect abroad.

“U.S. refusal to co-operate with foreign government requests for extradition might lead some governments to consider secretly extracting U.S. citizens,” the report said.

It also warned of potential obstruction of U.S. efforts and cited an Italian case against CIA agents, who were convicted last year of kidnapping a terrorism suspect in Milan and flying him to Egypt, where he says he was tortured during questioning.

“The proliferation of such cases would not only challenge US bilateral relations with other countries but also damage global counterterrorism efforts,” it said.

Reaction: People will give up your freedom for security!