NHS bosses have drawn up secret plans for sweeping cuts to services, with restrictions on the most basic treatments for the sick and injured. 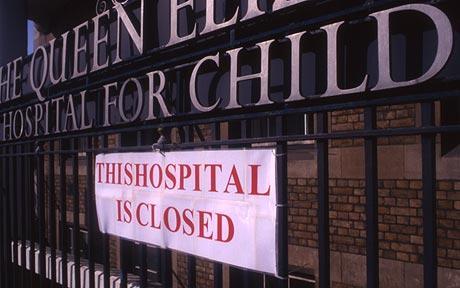 Some of the most common operations — including hip replacements and cataract surgery — will be rationed as part of attempts to save billions of pounds, despite government promises that front-line services would be protected.

Patients’ groups have described the measures as “astonishingly brutal”.

An investigation by The Sunday Telegraph has uncovered widespread cuts planned across the NHS, many of which have already been agreed by senior health service officials. They include:

* Restrictions on some of the most basic and common operations, including hip and knee replacements, cataract surgery and orthodontic procedures.

* Plans to cut hundreds of thousands of pounds from budgets for the terminally ill, with dying cancer patients to be told to manage their own symptoms if their condition worsens at evenings or weekends.

* The closure of nursing homes for the elderly.

* A reduction in acute hospital beds, including those for the mentally ill, with targets to discourage GPs from sending patients to hospitals and reduce the number of people using accident and emergency departments.

* Tighter rationing of NHS funding for IVF treatment, and for surgery for obesity.

* Thousands of job losses at NHS hospitals, including 500 staff to go at a trust where cancer patients recently suffered delays in diagnosis and treatment because of staff shortages.

* Cost-cutting programmes in paediatric and maternity services, care of the elderly and services that provide respite breaks to long-term carers.

The Sunday Telegraph found the details of hundreds of cuts buried in obscure appendices to lengthy policy and strategy documents published by trusts. In most cases, local communities appear to be unaware of the plans.

Dr Peter Carter, the head of the Royal College of Nursing, said he was “incredibly worried” about the disclosures.

He urged Andrew Lansley, the Health Secretary, to “get a grip” on the reality of what was going on in the NHS.

The Government has promised to protect the overall budget of the NHS, which will continue to receive above-inflation increases, but said the service must make “efficiency savings” of up to £20 billion by 2014, which would be diverted back to the front line.

Dr Carter said: “Andrew Lansley keeps saying that the Government will protect the front line from cuts – but the reality appears to be quite the opposite. We are seeing trusts making job cuts even when they have already admitted to being short staffed.

‘‘The statements he makes may be well intentioned – but we would implore him to get a grip on the reality, because these kinds of cuts are incredibly worrying.”

Katherine Murphy, of the Patients Association, said the cuts were “astonishingly brutal” and expressed particular concern at moves to ration operations such as hip and knee operations.

“These are not unusual procedures, this is a really blatant attempt to save money by leaving people in pain,” she said.

“Looking at these kinds of cuts, which trusts have drawn up in such secrecy, it particularly worries me how far they disadvantage the elderly and the vulnerable.

‘‘We cannot return to the days of people waiting in pain for years for a hip operation or having to pay for operations privately.”

She added that it was “incredibly cruel” to draw up savings plans based on denying care to the dying.

On Thursday, the board of Sutton and Merton primary care trust (PCT) in London agreed more than £50 million of savings in two years. The plan included more than £400,000 to be saved by “reducing length of stay” in hospital for the terminally ill.

As well as sending more patients home to die, the paper said the savings would be made by admitting fewer terminally ill cancer patients to hospital because they were struggling to cope with symptoms such as pain. Instead, more patients would be given advice on “self management” of their condition.

Bill Gillespie, the trust’s chief executive, said patients would stay at home, or be discharged from hospital only if that was their choice, and would be given support in their homes.

Doctors across the county have already been told that their patients can have the operations only if they are given “prior approval” by the PCT, with each authorisation made on a “case by case” basis.

Elsewhere, new restrictions have been introduced to limit funding of IVF.

While many infertile couples living in Yorkshire had previously been allowed two cycles of treatment — still short of national guidance to fund three cycles — all the primary care trusts in the county are now restricting treatment to one cycle per couple.

A “turnaround” plan drawn up by Peterborough PCT intends to make almost £100 million of savings by 2013.

Its cuts include closing nursing and residential homes and services for the mentally ill, sending 500 fewer patients to hospital each month, and cutting £17 million from acute and accident and emergency services.

Two weeks ago, Mid Yorkshire Hospitals trust agreed plans to save £55 million in two years, with £20 million coming from about 500 job losses.

Yet, a month before the decision was taken, senior managers at a board meeting described how staff shortages were already causing delays for patients being diagnosed and treated for breast cancer.

Mr Lansley said any trusts that interpreted the Government’s demands for efficiency savings as budget or service cuts were wrong to do so, and were “living in the past”.