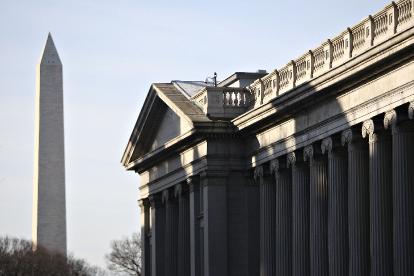 July 20 (Bloomberg) — U.S. taxpayers may be on the hook for as much as $23.7 trillion to bolster the economy and bail out financial companies, said Neil Barofsky, special inspector general for the Treasury’s Troubled Asset Relief Program.

The Treasury’s $700 billion bank-investment program represents a fraction of all federal support to resuscitate the U.S. financial system, including $6.8 trillion in aid offered by the Federal Reserve, Barofsky said in a report released today.

“TARP has evolved into a program of unprecedented scope, scale and complexity,” Barofsky said in testimony prepared for a hearing tomorrow before the House Committee on Oversight and Government Reform.

Treasury spokesman Andrew Williams said the U.S. has spent less than $2 trillion so far and that Barofsky’s estimates are flawed because they don’t take into account assets that back those programs or fees charged to recoup some costs shouldered by taxpayers.

“These estimates of potential exposures do not provide a useful framework for evaluating the potential cost of these programs,” Williams said. “This estimate includes programs at their hypothetical maximum size, and it was never likely that the programs would be maxed out at the same time.”

Barofsky’s estimates include $2.3 trillion in programs offered by the Federal Deposit Insurance Corp., $7.4 trillion in TARP and other aid from the Treasury and $7.2 trillion in federal money for Fannie Mae, Freddie Mac, credit unions, Veterans Affairs and other federal programs.

Williams said the programs include escalating fee structures designed to make them “increasingly unattractive as financial markets normalize.” Dependence on these federal programs has begun to decline, as shown by $70 billion in TARP capital investments that has already been repaid, Williams said.

Barofsky offered criticism in a separate quarterly report of Treasury’s implementation of TARP, saying the department has “repeatedly failed to adopt recommendations” needed to provide transparency and fulfill the administration’s goal to implement TARP “with the highest degree of accountability.”

As a result, taxpayers don’t know how TARP recipients are using the money or the value of the investments, he said in the report.

“This administration promised an ‘unprecedented level’ of accountability and oversight, but as this report reveals, they are falling far short of that promise,” Representative Darrell Issa of California, the top Republican on the oversight committee, said in a statement. “The American people deserve to know how their tax dollars are being spent.”

The Treasury has spent $441 billion of TARP funds so far and has allocated $202.1 billion more for other spending, according to Barofsky. In the nine months since Congress authorized TARP, Treasury has created 12 programs involving funds that may reach almost $3 trillion, he said.

Treasury Secretary Timothy Geithner should press banks for more information on how they use the more than $200 billion the government has pumped into U.S. financial institutions, Barofsky said in a separate report.

The inspector general surveyed 360 banks that have received TARP capital, including Bank of America Corp., JPMorgan Chase & Co. and Wells Fargo & Co. The responses, which the inspector general said it didn’t verify independently, showed that 83 percent of banks used TARP money for lending, while 43 percent used funds to add to their capital cushion and 31 percent made new investments.

Barofsky said the TARP inspector general’s office has 35 ongoing criminal and civil investigations that include suspected accounting, securities and mortgage fraud; insider trading; and tax investigations related to the abuse of TARP programs.