• Move will add to fears over Europe’s debt crisis

• IMF pulled €20bn finance deal for Hungary at the weekend 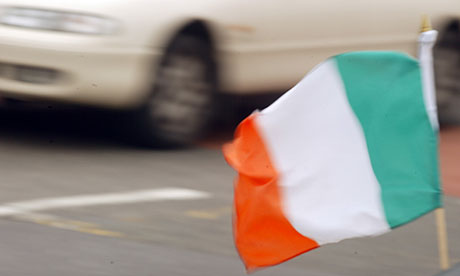 The agency cut Ireland’s sovereign bond rating by one notch to Aa2 this morning, citing weaker growth prospects and the high cost of rebuilding the country’s crippled banking system. It added that the outlook was stable.

But the downgrade comes after the International Monetary Fund and the European Union pulled a €20bn (£17bn) financing deal for Hungary over the weekend. Talks broke down on Saturday after the European commission voiced concerns over the newly elected Hungarian government’s budget plans.

This means Hungary will not have access to remaining funds of €5.5bn in its €20bn credit line, agreed two years ago, until a review is completed. Hungary’s currency, the forint, plunged more than 2.5% against the euro on the news and bond yields surged by up to 30 basis points.

Ireland’s downgrade came ahead of a bond auction tomorrow.

“Today’s downgrade is primarily driven by the Irish government’s gradual but significant loss of financial strength, as reflected by its deteriorating debt affordability,” said Dietmar Hornung, lead analyst for Ireland at Moody’s.

The cost of bailing out Anglo Irish Bank last year gave Ireland a budget deficit of 14% of GDP, the highest in Europe, which could rise to 20% this year.

Martin Mansergh, Ireland’s minister of state for finance, said the Moody’s verdict was no surprise. “It’s really not telling us anything that we don’t know already. We all know that banking and real estate are not going to be sources of growth.”

Tax breaks on new buildings led to a massive property bubble, with construction suddenly making up a fifth of Ireland’s economy. Irish banks went on a lending spree and by the time of the global financial crisis held a huge amount of debt (Anglo Irish Bank alone had €73bn of loans – half of Ireland’s GDP). Not surprisingly, Ireland was the first country in the eurozone to plunge into recession.

Gary Jenkins at Evolution Securities noted that Moody’s also placed Spain’s ratings on review at the end of last month.

“Nothing on Italy yet, but considering that there is a two-notch differential between Moody’s and S&P it would not be a major surprise if Moody’s didn’t take a look at Italy next,” he added.

Germany’s Bundesbank warned in its monthly report today that economic imbalances in peripheral eurozone countries posed risks to the bloc as a whole and called on them to take urgent action to cut their deficits. “Only with these [measures] will the financial markets’ lost confidence be restored,” the report said.

Europe’s governments are rushing to shore up their finances after a spate of ratings downgrades – most notably to Greece, Spain and Portugal – plunged stock markets into turmoil. So-called austerity measures are being pushed through parliaments across the continent and in the UK, ranging from increasing retirement ages to slashing public sector wages and jobs.

Hungary’s economy minister was defiant this morning, ruling out further austerity measures, and insisting that the government would push through a new financial sector tax this year.

“Hungary has experienced a programme of austerity over the past five years, we inherited this from the previous governments and we would like to do away with the unfortunate consequences of these steps,” Gyorgy Matolcsy told public television station m1. “We have told our partners that further austerity packages were out of the question.”

However, later on he appeared more conciliatory, saying in an interview with CNBC that he expected to eventually reach an agreement with the IMF and the EU.

The IMF insisted on Saturday that Hungary would have to take additional measures to meet its deficit targets this year and next. In a separate statement, the European commission said reducing Hungary’s deficit by next year “will require tough decisions, notably on spending”.

This contrasts with Hungary’s plans to cut its budget deficit to 3.8% of GDP mainly with funds raised from the planned tax on banks.

European shares fell for a third session this morning, led lower by banks, and the euro slipped off two-month highs. It bought $1.2925 in early European trading, down from $1.2947 in New York on Friday night. In London, the FTSE 100 index traded down about 18 points at 5140.74.

Market players are eagerly awaiting the results of stress tests on 91 European banks, which are due to be published on Friday.

“Following the Irish rating rationale, it will be very interesting to see which countries could have higher contingent liabilities to their respective banking sectors following the bank stress tests,” said Gerard Fitzpatrick, global fixed income portfolio manager of Russell Investments. “This could further prompt rating downgrades by the rating agencies, with the potential for a concurrent fall in prices.”