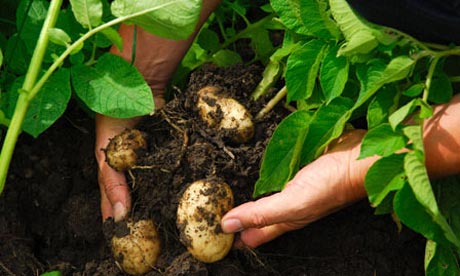 Anti-GM campaigners say a trial to genetically protect potatoes against blight is a waste of taxpayers’ money because a naturally produced strain already gives immunity.

The scientist in charge of a taxpayer-funded trial that may determine whether genetically modified crops will be grown in the UK has been attacked for his close links to the US biotech giant Monsanto.

Professor Jonathan Jones, head of the Sainsbury Laboratory at the John Innes Centre, the UK’s leading plant research centre, has shrugged off the controversy, insisting he has never tried to hide his business relationship with Monsanto or the GM industry.

But as the scientist overseeing the first UK trials of a GM potato, Jones has found himself at the centre of a storm after anti-GM campaigners used social networking sites such as Twitter to highlight the close links between a company he founded, Mendel Biotechnology, and Monsanto.

Mendel’s website states: “Mendel’s most important customer and collaborator for our technology business is Monsanto, the leading agricultural biotechnology company in the world.”

Jonathan Matthews, spokesman for GM Watch, which campaigns against the technology, said: “The frontman for the latest GM push in the UK is being portrayed as a dedicated public servant doing science in the public interest, but it now appears he not only has vested interests in the success of GM but even commercial connections to Monsanto.”

Jones made no reference to the links in an article he wrote recently for the BBC website that attacked anti-GM campaigners as “fussy eaters”. He wrote: “Some fear the domination of the seed industry by multinationals, particularly Monsanto. We need smart, sustainable, sensitive science and technology, and we need to use every tool in our toolbox, including GM.”

In a statement to the Observer, Jones insisted: “It is not true to suggest I have attempted to hide my role as co-founder and science advisory board member of Mendel Biotechnology, which has contracts with Monsanto, Bayer and BP. The information that I am co-founder… of Mendel has been in the public domain on the Mendel website for at least 10 years.” He also defended the GM trial in Norfolk, aimed at creating varieties of potato that would not need to be sprayed with fungicides to protect them from blight.

Critics claim the trial, the results of which are likely to be used to “sell” GM technology to the British public, is a waste of money because blight-resistant potatoes have already been produced through other techniques. “Given the availability of viable alternatives, the GM potato trial increasingly looks like nothing more than a PR stunt,” Matthews said.

But Jones said it would be for the government to decide whether the trial had been a success. “At the end of the trial we will be able to tell you whether the blight resistance genes we are trialling work,” Jones said. “I will not be (and do not want to be) in a position to dictate whether or not that affects UK policy towards the technology.”

Friends of Jones said that it was unfair to attack him for not stating his links to the GM industry. “If he doesn’t restate any links every time he writes a piece, that doesn’t mean he hasn’t highlighted them,” said one, pointing to the close links between the organic food lobby and anti-GM campaigners. “It is frustrating for scientists that journalists only look at scientists’ links and don’t look at other vested interests.”

Experts said there was little alternative for those researching GM crops to work with the likes of Monsanto because the Plant Breeding Institute, the public body that used to research new crops, was privatised under the Thatcher government, meaning scientists working in the field had to develop relationships with the private sector.

It has been claimed that the first GM potatoes could be available to commercial UK growers within five years, if the Norfolk trial is successful.