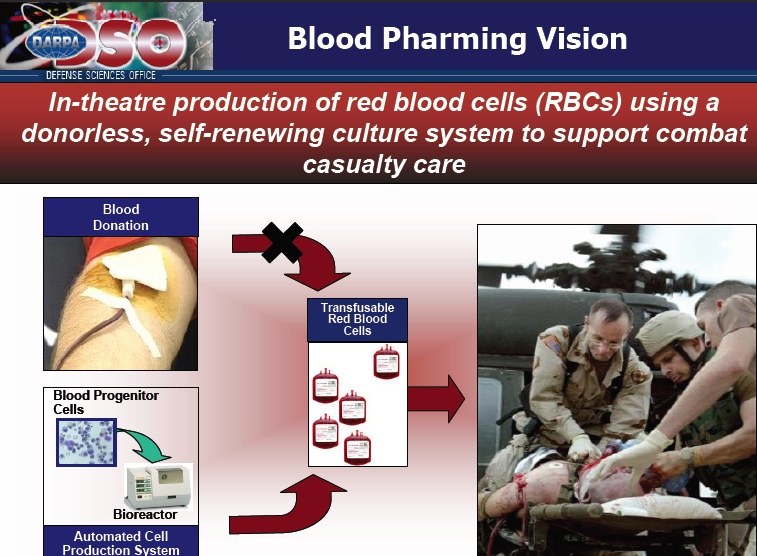 Darpa launched a search for a renewable blood supply in 2008 (Click on image to enlarge.)

American scientists have developed ‘artificial’ blood that could soon be used to treat wounded soldiers in battle.

The genetically-engineered blood is created by taking cells from umbilical cords and using a machine to mimic the way bone marrow works to produce mass quantities of usable units of red blood cells.

Known as ‘blood pharming’ the programme was launched in 2008 by the Pentagon’s experimental arm, Darpa, to create blood to treat soldiers in far-flung battlefields.

The firm Arteriocyte, which received $1.95 million for the project, has now sent off its first shipment of O-negative blood to the food and drugs watchdog in the US, the FDA. 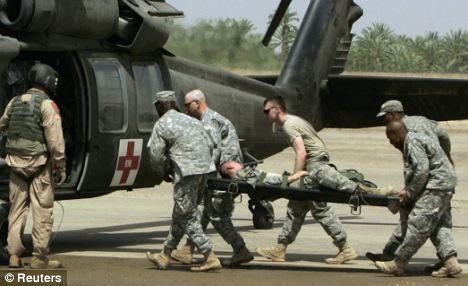 The blood is made by using hematopoietic cells taken from umbilical cords in a process called ‘pharming’ – using genetically engineered plants or animals to create mass quantities of useful substances.

One umbilical cord can be turned into around 20 units of usable blood. A wounded soldier in the field will require an average of six units during treatment.

‘Our model works, but we need to extrapolate our production abilities to make scale.’

If approved it could revolutionise battlefields where a shortage of blood donors can hamper treatment of wounded soldiers.

The process of giving transfusions in war zones is also made more difficult because donated blood has to be transported long distance before it reaches the field hospitals where it is urgently needed.

Some blood is already 21 days old before it reaches patients, meaning it only has around a week-long shelf-life before it must be discarded. There are increased risks of infection or organ failure if blood is too old.

‘And they’ll set up mobile blood banks in a war zone, but even every troop rolling up their sleeve might not be enough when you’ve got a crisis with dozens or more injuries.’

Human trials are not likely until 2013, but the firm predicts the ‘pharmed’ blood could be used by the military within five years if the Pentagon calls for it sooner.

A unit of blood is around a pint and the human body contains between eight and ten pints of blood in total.

Currently, each unit made by Arteriocyte costs $5,000 to produce. If approved, the firm expects to bring this down to around $1,000 per unit by scaling up the production process.

As well as being needed by the military, ‘pharmed’ blood could also be used in hospitals to make up for shortfalls in blood donations if it is approved.

The ‘pharmed’ blood is type O negative which is the most sought after variation because it can be used with any patient, regardless of their own blood type.

Last month the US Red Cross issued an urgent appeal for blood donors to come forward after it said that its supply of O Negative blood was hitting ‘critically low levels.’