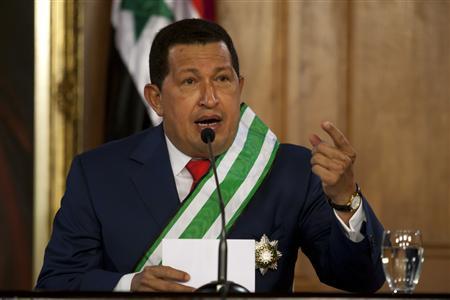 CARACAS (Reuters) – Venezuela’s President Hugo Chavez described Israel on Saturday as a genocidal state that acted as an assassin for the United States, predicting the Middle East nation would one day be “put in its place.”

The socialist Chavez is a harsh critic of both Israel and the United States and cut relations with Israel after accusing it of “holocaust” for its 2009 offensive in the Gaza Strip.

“It has become the assassin arm of the United States, no one can doubt it. It is a threat to all of us,” Chavez said, during a visit by Syrian President Bashar al-Assad.

Chavez said he supported a peaceful struggle for the return to Syria of the Golan Heights, captured by Israel in 1967.

“The territory will one day return to the Syrian hands,” Chavez said. “Of course we want it to be peaceful because we don’t want more war.”

“But one day the genocidal state of Israel will be put into its place, and let’s hope that a really democratic state emerges there, with which we can share a path and ideas.”

Chavez did not offer further details of what putting Israel “in its place” would entail.

U.S. attempts to isolate Syria and reshape the Middle East have failed, he said, and Israel was fast losing allies.

Israel last week eased its land blockade on the Gaza Strip, allowing in all goods except for arms and related materials. That move followed widespread criticism for a raid on a blockade-busting group of boats, in which nine activists died.

Hugely popular in the Arab world for his fierce “anti-imperialist” stance. Chavez received a hero’s welcome when he visited Syria in 2006. He returned to Damascus on a tour last year.

Assad arrived in Venezuela on Friday, the first stop on a rare Latin American tour. He is also due to visit Argentina, Brazil and Cuba.

Syria has started to raise its international profile in recent years, shrugging off Western efforts to weaken it and developing ties with former foe Turkey, Russia and with Latin American nations.

Assad, who faces a decline in domestic oil production and droughts that have hit agriculture, is looking to reinforce links with a rich Syrian expatriate community in the region and with economic power Brazil.

His tour is expected to focus on bilateral issues and Syria’s hopes to attract $44 billion in private foreign investment over five years to repair its infrastructure.

He applauded Chavez’s loud criticism of the United States and Israel. “Few politicians are brave enough to say no, when it is necessary to say no,” Assad said as he arrived at the Miraflores presidential palace.

“He has revealed an image of Venezuela in resistance, creating a place for Venezuela on the international map. He has been on the side on just causes both in Latin America, in our region the Middle East and in the whole world.”

3 thoughts on “Venezuela’s President Chavez: ‘Genocidal’ Israel will be put in its place”