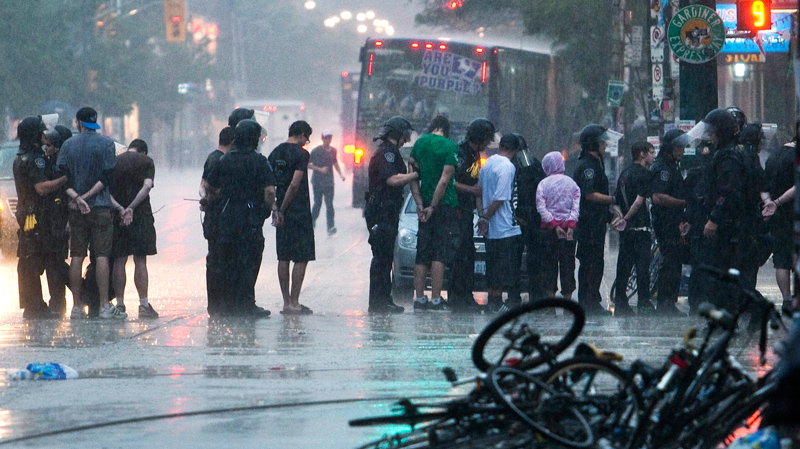 Police arrest protesting cyclists along the streets of downtown Toronto during the G20 Summit on Sunday, June 27, 2010. (Ryan Remiorz / THE CANADIAN PRESS)

A tense and bizarre standoff between police and a crowd lingering in central Toronto following a weekend of G20 protests has ended after nearly four hours.

At a busy intersection in the city’s core, a large contingent of police boxed in a group of about 200 people in heavy rain. They were not allowed to leave the area.

Dozens were arrested during the police action, which occurred only steps from where police cruisers were torched 24 hours earlier.

Talking to reporters late Sunday night, Toronto Police Staff Superintendent Jeff McGuire was pressed to explain why police had barricaded people for so long in the rain, before simply letting them go.

McGuire said, “We’re not perfect in everything we do, but our interest was in the safety of the citizens of Toronto.”

He added that police were trying to prevent the kind of violence caused by Black Bloc tactics the day before, and found weapons in the area.

“I don’t know the specific weapons. I’ve been advised that some weapons were found along the route as the officers were forming around this group,” he said.

Arrests linked to the G20 demonstrations have led to more than 600 arrests over the weekend.

CTV’s Lisa LaFlamme said officers picked out some from the crowd and arrested them. A CTV News cameraman reporting from the scene was taken into police custody, but was released later.

Some who had been held inside the make-shift human corral, located at Queen Street and Spadina Avenue, said that they were simply in the wrong place at the wrong time. When rain began to pour down, many were unprepared.

Police have made at least 604 arrests this weekend, with about 253 taking place Sunday. Those numbers will likely rise.

Earlier, there was a tense standoff at a temporary detention centre where hundreds of people arrested during the protests are being held.

Outside the detention centre, which is about four kilometres east of the downtown core, police made a deal with the crowd, telling them they would release some of those arrested if the crowd moved off a busy street. The deal appeared to work and the crowd stepped back.

Initially, police had issued two five-minute warnings to the crowd to get out of the area, but the demonstrators didn’t move.

Some people arrested in Saturday were eventually released from the detention centre with conditions to appear in court. Others had their charges dropped.

Earlier, a riot squad used rubber bullets and blank rifle shots to drive back about 100 demonstrators at a seemingly peaceful sit-in outside the detention centre. Police then apprehended an alleged member of an anarchist protest group.

Prime Minister Stephen Harper commented on the protests for the first time Sunday, saying the violence was unacceptable.

“We obviously deplore the actions of a few thugs but the reality is unfortunately that these summits attract this element and that has been a problem, as we know, around the world,” he said.

“That said, this goes a long way to explaining why we have the kind of security costs around these summits that we do.”

The incidents follow a number of arrests earlier Sunday. Police detained around 100 more people in connection with Saturday’s violent protests against the G20 summit.

While the streets of Toronto were calm early Sunday morning, dozens of police officers headed out to their positions across the downtown core and raided a building on the University of Toronto campus.

A spokesperson for the Integrated Security Unit said officers found a cache of “street-type weaponry” such as bricks.

“Our officers are out pro-actively looking for anybody with criminal intent,” said Const. Samantha Nulle. “Today they located a large number of people, they intercepted them and they did locate a number of street weapons on them.”

Those arrested over the past 24 hours face a wide array of charges, from mischief and breach of the peace to assault, drug possession and dangerous weapons.

An Ontario court building in the northwest of Toronto saw the first wave of cases on Sunday.

One by one, the accused were led into one of the five designated courtrooms to have their cases heard.

Common charges included assaulting a police officer, mischief and participating in an unlawful assembly. The Canadian Press reports that many were released on the condition they stay out of Toronto’s downtown core, keep the peace and not take part in any demonstrations until a court-appointed date.

Nathalie Desrosiers of the Canadian Civil Liberties Association said monitors from her organization are among those being held at the detention centre, and she is concerned about the conditions under which they are being detained.

On Saturday, while thousands of marchers peacefully walked from the Ontario legislature along a pre-planned route, a group of self-described anarchists broke away to confront police and vandalize stores, banks and other buildings.

At least three police cars were also set fire. No serious injuries among protesters have been reported, although police did use tear gas and rubber bullets on some demonstrators.

OPP Commissioner Julian Fantino, whose officers are seconded to the Integrated Security Unit, said a number of officers were taken to hospital with injuries.

Fantino said officers had urine, paint and various objects thrown at them during the chaos, actions the commissioner called “disgraceful.”