Council on Foreign Relations member Matt Simmons calls for the evacuation of the gulf states.

Each day, another way to define worst-case for oil spill 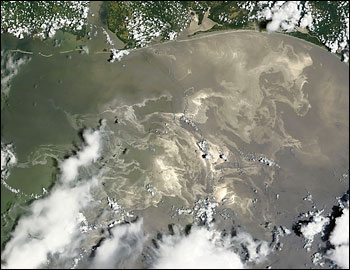 An enduring feature of the gulf oil spill is that, even when you think you’ve heard the worst-case scenario, there’s always another that’s even more dire.

The base-line measures of the crisis have steadily worsened. The estimated flow rate keeps rising. The well is like something deranged, stronger than anyone anticipated. BP executives last month said they had a 60 to 70 percent chance of killing it with mud, but the well spit the mud out and kept blowing.

The net effect is that nothing about this well seems crazy anymore. Week by week, the truth of this disaster has drifted toward the stamping ground of the alarmists.

The most disturbing of the worst-case scenarios, one that is unsubstantiated but is driving much of the blog discussion, is that the Deepwater Horizon well has been so badly damaged that it has spawned multiple leaks from the seafloor, making containment impossible and a long-term solution much more complicated.

Video from a robotic submersible, which is making the rounds online, shows something puffing from the seafloor. Some think it’s oil. Or maybe — look again — it’s just the silt blowing in response to the forward motion of the submersible.

More trouble: A tropical wave has formed in the Caribbean and could conceivably blow through the gulf.

“We’re going to have to evacuate the gulf states,” said Matt Simmons, founder of Simmons and Co., an oil investment firm and, since the April 20 blowout, the unflagging source of end-of-the-world predictions. “Can you imagine evacuating 20 million people? . . . This story is 80 times worse than I thought.”

The bull market for bad news means that Coast Guard Adm. Thad Allen, the government’s point man for the crisis, is asked regularly about damage to the well bore, additional leaks and further failures. “Can you talk a little about the worst-case scenarios going forward?” a reporter asked Tuesday. “What happens if the relief wells don’t work out?”

“We’re mitigating risk on the relief well by drilling a second relief well alongside it,” responded Allen, possibly the least excitable figure in this entire oil crisis.

He said he’s seen no sign of the additional leaks that have gotten so many bloggers in a lather. But Allen’s briefings offer plenty of fodder for the apocalyptic set. Allen repeatedly has acknowledged that there could be significant damage to the well down below the mud line. That’s why, he said, the top kill effort last month was stopped: Officials feared that if they continued pumping heavy mud into the well, they would damage the casing and open new channels for hydrocarbons to leak into the rock formation.
ad_icon

“I think that one thing that nobody knows is the condition of the well bore from below the blowout preventer down to the actual oil field itself,” Allen said last week. “We don’t know if the well bore has been compromised or not.”

And by the way, the blowout preventer is leaning, Allen said.

“The entire arrangement has kind of listed a little bit,” he said. A government spokesman later said this development wasn’t new.

Even the most sober analysts are quick to say that this is such an unpredictable well that almost anything is possible. Bruce Bullock, director of the Maguire Energy Institute at Southern Methodist University, said additional leaks are a possible source of deep-sea plumes of oil detected by research vessels. But this part of the gulf is pocked with natural seeps, he noted. Conceivably the drilling of the well, and/or the subsequent blowout, could have affected the seeps, he said.

“Once you started disturbing the underground geology, you may have made one of those seeps even worse,” he said.

But Tadeusz Patzek, a professor who is the chairman of the department of petroleum and geosystems engineering at the University of Texas, argues that the discussion has been hijacked by people who don’t know what they’re talking about.

“There is a lot of fast talk, which has little relation sometimes to reality,” Patzek said. “And there is jumping to conclusions by the people who have no right to jump to any conclusions because they don’t know.”

Much of the worst-case-scenario talk has centered on the flow rate of the well. Rep. Edward J. Markey (D-Mass.), among the harshest critics of BP in recent weeks, generated headlines with a dramatic announcement Sunday.

The 1,000- and 5,000-barrel figures (42,000 gallons and 210,000 gallons), however, were estimates of the actual flow; the 100,000-barrel figure (4.2 million gallons) in the internal BP document was based on a hypothetical situation. The document stated, “If BOP and wellhead are removed and if we have incorrectly modeled the restrictions — the rate could be as high as {tilde}100,000 barrels per day.” The blowout preventer and wellhead have not been removed.

Another undated BP document, released by Sen. Charles E. Grassley (R-Iowa) last week, has an even more dramatic worst-case scenario for the well’s flow rate, but again one based not on the well as it is but on a theoretical formulation arrived at before the drilling. Under the heading “Maximum Discharge Calculation,” the document states that, given the most “optimistic assumptions” about the size of the reservoir and the intensity of the pressure at depth and assuming a total loss of well control and no inhibitions on the flow, “a maximum case discharge of 162,000 barrels per day was estimated.”

After the Deepwater Horizon rig sank, BP recalculated that estimate based on what was known about the well. BP executives in early May briefed members of Congress on their conclusion: that the absolute worst-case flow rate was 60,000 barrels, with a “more reasonable worst-case scenario” of 40,000 barrels a day, the document states.

Today the official government estimate of the flow, based on multiple techniques that include subsea video and satellite surveys of the oil sick on the surface, is 35,000 to 60,000 barrels a day.

In effect, what BP considered the worst-case scenario in early May is in late June the bitter reality — call it the new normal — of the gulf blowout.