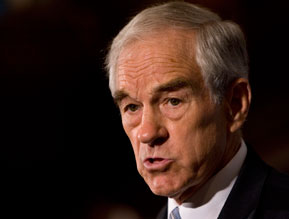 “Dr. No,” as some call him on Capitol Hill, doesn’t agree with Obama’s decision to remove Gen. Stanley McChrystal from command of U.S. troops in Afghanistan. (AP)

Ron Paul thinks President Obama got it wrong yesterday when he got rid of Stanley McChrystal.

“They should have changed the policy and kept the general. Maybe that would have been better,” Paul said on Thursday. “But it’s the policymakers that are at fault, not the generals, they tried to follow the orders but the policy behind it is at fault.”

Paul, a fierce critic of the war in Afghanistan, said that the inflammatory comments made by members of McChrystal’s staff in Rolling Stone were evidence of frustration over what he says is the war’s failed policy.

“That McChrystal thing is just a symptom of what we won’t face up to, which is that it’s a totally failed policy,” Paul said. “If we were on the verge of a great success, do you think we’d fire the general? So it was an absolute confirmation of the failed policy, and yet the policy doesn’t change.”

Republican members have mostly been supportive of Obama’s decision to replace McChrystal but keep the same counterinsurgency policy, which was largely based on McChrystal’s recommendations.