If the European climate turns nasty, the ECB could suffer from exposure

Here’s an interesting statistic which brings home the rather tricky state of Europe’s finances, not to mention its politics. 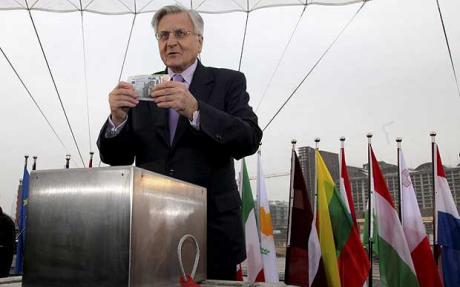 Jean-Claude Trichet, president of the European Central Bank, holds a selection of euro notes during a ceremony to lay the cornerstone for its new headquarters in Frankfurt (BLOOMBERG)

The European Central Bank (ECB), that one-time paragon of sound money, has capital and reserves of €77.3bn (£66bn).

But thanks to events in Greece, it is now supporting lending to Hellenic banks of €88.4bn, or at least it was at the end of April. Quite where that has got to by now is anybody’s guess. And that April figure is a €17.8bn increase on the March total, according to Simon Ward, chief economist at Henderson Global Investors.

On top of that exposure, the ECB has also taken on an extra €25bn through its buying of Greek government bonds.

So the ECB’s Greek exposure is bigger, by some margin, than its own capital and reserves. You will be reassured to learn that the Frankfurt-based central bank has taken Greek collateral to back these loans and insisted that collateral suffers a suitable discount, or haircut, in value to reflect the risk of default.

What we don’t know is what that haircut is, and how realistic it is, given the sensitive politics surrounding EU-Greece relations.

So far the ECB has yet to make a call for more capital to support its lending operations to distressed European financial systems. But if a run on banks, as witnessed recently in Greece, is repeated in countries such as Italy, Portugal and Spain because confidence in institutions wavers further, this situation will change as a full scale banking bail out gathers pace.