PRAGUE — Fears that the debt crisis could migrate to central Europe were stirred Friday after a senior Hungarian government official said the previous government had manipulated budget figures and lied about the state of the economy, but most financial experts dismissed the remarks as a ham-handed negotiating ploy.

The official, Peter Szijjarto, a spokesman for Prime Minister Viktor Orban, was quoted by Bloomberg News and other news agencies as saying that the Hungarian economy was in a “very grave situation.” He even raised the specter of a default, saying such speculation “isn’t an exaggeration.”

His comments followed similar warnings on Thursday by Lajos Kosa, a vice president of the governing center-right Fidesz party, and other officials that Hungary was in danger of suffering a Greek-style crisis, with budget deficits — officially 4 percent of gross domestic product in 2009 — possibly reaching 7.5 percent of G.D.P. this year.

After the comments, the Hungarian currency slid and the yield on benchmark 10-year Hungarian bonds surged, to close at 8.1 percent from 7.4 percent on Thursday. The Budapest Stock Exchange Index closed down 3.4 percent, having fallen as much as 7.1 percent earlier in the day.

For all the alarmism by senior government officials in recent days, however, economists said the country was nowhere near the crisis level of Greece and emphasized that the comments appeared to have been politically motivated to tarnish the previous Socialist government and to give Mr. Orban a stronger negotiating position with the I.M.F. 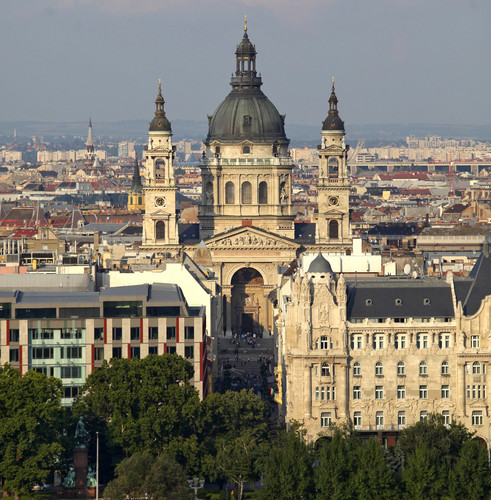 St. Stephen’s Basilica stands above the rooftops in Budapest. (Bloomberg)

June 4 (Bloomberg) — Credit-default swaps on sovereign bonds surged to a record on speculation Europe’s debt crisis is worsening after Hungary said it’s in a “very grave situation” because a previous government lied about the economy.

The cost of insuring against losses on Hungarian sovereign debt rose 63 basis points to 371, according to CMA DataVision at 3:30 p.m. in London, after earlier reaching 416 basis points. Swaps on France, Austria, Belgium and Germany also rose, sending the Markit iTraxx SovX Western Europe Index of contracts on 15 governments as high as a record 174.4 basis points.

Hungary’s bonds fell after a spokesman for Prime Minister Viktor Orban said talk of a default is “not an exaggeration” because a previous administration “manipulated” figures. The country was bailed out with a 20 billion-euro ($24 billion) aid package from the European Union and International Monetary Fund in 2008.

“The comments out of Hungary have really spooked the market,” said Rajeev Shah, a credit strategist at BNP Paribas SA in London. “Investors are interpreting it as bad sign for trying to tackle Europe’s debt crisis.”

The euro dropped below $1.21 for the first time since April 2006, stocks tumbled and the cost of insuring against corporate default rose on speculation Hungary will weaken the EU’s willingness to rescue the region’s indebted nations.

“Are we on the brink of something more serious?” Deutsche Bank AG strategist Jim Reid wrote in a note to clients today. “We’ve little doubt that the authorities have no appetite for imminent peripheral defaults but we do see the situation getting worse before it gets better. This leaves markets vulnerable until there is more certainty surrounding the structure of the peripheral funding bail-out.”

Credit-default swaps pay the buyer face value in exchange for the underlying securities or the cash equivalent should a borrower fail to adhere to its debt agreements. A basis point on a contract protecting $10 million of debt from default for five years is equivalent to $1,000 a year.

To contact the reporter on this story: Kate Haywood in London at khaywood@bloomberg.net