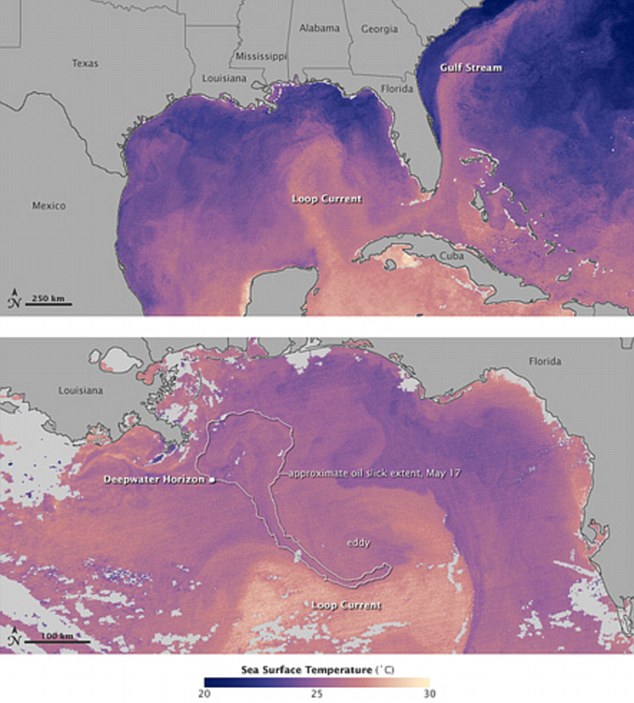 Spread: The top NASA image shows the powerful ‘loop current’ of faster moving water the oil is hitting which circulates around the Gulf before bending around Florida and up the Atlantic coast. The bottom image shows the extent of the spill

Oil from the Gulf of Mexico spill has for the first time reached a powerful current that could take it to Florida and beyond, say scientists.

A small portion of the slick has entered the so-called ‘loop current’, a stream of faster moving water that circulates around the Gulf before bending around Florida and up the Atlantic coast, said the National Oceanic and Atmospheric Administration.

Its arrival may herald a wider environmental catastrophe affecting the Florida Keys and tourist-dotted beaches along that state’s East coast.

Even farther south, U.S. officials are talking to Cuba about how to respond to the spill should it reach the island’s northern coast.

Florida’s state meteorologist said it will be at least another seven days before the oil reaches waters west of the Keys, and state officials sought to reassure visitors that its beaches are still clean and safe.

During a news conference, David Halstead, the director of the Florida Division of Emergency Management, showed off a picture of a Coppertone bottle on a beach.

‘What’s the only oil on the beaches? Suntan oil,’ he said.

Tar balls found earlier in the Florida Keys were not from the spill, the Coast Guard has said. Still, at least 6million gallons have already poured into the Gulf off Louisiana since the April 20 explosion of an offshore oil rig that killed 11 workers and led to the spill, the worst U.S. environmental disaster in decades.

Tar balls have washed ashore as far east as Alabama, and Louisiana Gov. Bobby Jindal declared Wednesday that heavier oil was now soiling his state’s coastal marshes. Earlier waves of the slick had begun as a thin sheen before the thicker stuff starting washing ashore this week.

The governor, inspecting the Mississippi Delta by boat, swept a fishnet through water, holding up a chocolate-thick ooze. The delta region is home to rare birds, mammals and a wide variety of marine life in marshy wildlife refuges and offshore islands.

Billy Nungesser, president of coastal Plaquemines Parish, Louisiana, said the oil ‘has laid down a blanket in the marsh that will destroy every living thing there’.

In Washington, environmental groups criticised how BP PLC, the oil giant that operated the Deepwater Horizon rig, has handled the response, and urged the government to take greater control of the situation.

‘Too much information is now in the hands of BP’s many lawyers and too little is being disclosed to the public,’ Larry Schweiger, president of the National Wildlife Federation, told the House Transportation and Infrastructure Committee.

‘The Gulf of Mexico is a crime scene and the perpetrator cannot be left in charge of assessing the damage.’

BP has received thousands of ideas from the public on how to stop the oil gusher, but some inventors are complaining that their efforts are being ignored.

Oil-eating bacteria, bombs and a device that resembles a giant shower curtain are among the 10,000 fixes people have proposed to counter the growing environmental threat. BP is taking a closer look at 700 of the ideas, but the oil company has yet to use any of them.

‘They’re clearly out of ideas, and there’s a whole world of people willing to do this free of charge,’ said Dwayne Spradlin, CEO of InnoCentive Inc., which has created an online network of experts to solve problems.

‘They’re taking bits of ideas from lots of places,’ he said. ‘This is not just a PR stunt.’

BP succeeded in partially siphoning away the leak over the weekend, when it hooked up a mile-long tube to the broken pipe, sending some of the oil to a ship on the surface. And the company said Wednesday it hopes to begin shooting a mixture known as drilling mud into the blown-out well by Sunday.

The ‘top kill’ method involves directing heavy mud into crippled equipment on top of the well, then aiming cement at it to permanently keep down the oil. Even if it works, it could take several weeks to complete.

If it fails, BP is considering a ‘junk shot’, which involves shooting knotted rope, pieces of tires and golf balls into the blowout preventer.

Crews hope they will lodge into the nooks and crannies of the device to plug it.

About 70 BP workers are taking more suggestions at a tip line center in Houston.

The company plans to test one idea from actor Kevin Costner, who has invested more than $24million on developing a centrifuge that can be dropped into the slick and separate the water from oil, storing the petroleum in tanks.

‘It’s like a big vacuum cleaner,’ said Costner’s business partner, John Houghtaling II of New Orleans. ‘These machines are ready to be employed. The technology is familiar to the industry.’

Tracking the unpredictable spill and the complex loop current is a challenge for scientists, said Charlie Henry, a NOAA environmental scientist.

The loop moves based on the shifting winds and other environmental factors, so even though the oil is leaking continuously it may be in the current one day, and out the next. And the slick itself has defied scientists’ efforts to track it and predict its path.

Instead, it has repeatedly advanced and retreated, an ominous, shape-shifting mass in the Gulf, with vast underwater lobes extending outward.

‘The key point is that we watch and study and monitor oil adjacent to the loop current and we model it to try to get ahead of it,’ Henry said.