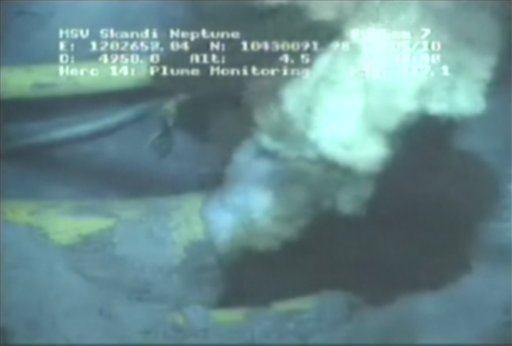 FILE – This image from a video released by BP PLC shows oil and gas spewing from a yellowish, broken pipe 5,000 feet below the surface. The video released Wednesday May 12, 2010 gives a not-yet-seen glimpse of the leaking well a mile underwater. The stream occasionally can be seen becoming lighter as natural gas mixes into the gusher. BP was confident Saturday May 15, 2010 its latest experiment using a mile-long pipe and stopper would capture much of the oil flowing into the Gulf of Mexico, even as the company disclosed yet another setback in the environmental disaster. (AP

NEW ORLEANS — BP said Monday it was siphoning more than one-fifth of the oil that has been spewing into the Gulf for almost a month, as worries escalated that the ooze may reach a major ocean current that could carry it through the Florida Keys and up the East Coast.

BP PLC chief operating officer Doug Suttles said Monday on NBC’s “Today” that a mile-long tube was funneling a little more than 1,000 barrels — 42,000 gallons — of crude a day from a blown well into a tanker ship. The company and the U.S. Coast Guard have estimated about 5,000 barrels — 210,000 gallons — have been spewing out each day. Engineers finally got the contraption working on Sunday after weeks of failed solutions — however, millions of gallons of oil are already in the Gulf of Mexico.

A researcher told The Associated Press that computer models show the oil may have already seeped into a powerful water stream known as the loop current, which could propel it into the Atlantic Ocean. A boat is being sent later this week to collect samples and learn more.

“This can’t be passed off as ‘it’s not going to be a problem,'” said William Hogarth, dean of the University of South Florida’s College of Marine Science. “This is a very sensitive area. We are concerned with what happens in the Florida Keys.”

BP PLC engineers remotely guiding robot submersibles had worked since Friday to place the tube into a 21-inch pipe nearly a mile below the sea. After several setbacks, it was working, though Suttles acknowledged there was still work to be done to get the device working at full capacity.

BP failed in several previous attempts to stop the leak, trying in vain to activate emergency valves and lowering a 100-ton container that got clogged with icy crystals. They have used chemicals to disperse the oil. Tar balls have been sporadically washing up on beaches in several states, including Mississippi where at least 60 have been found. But so far, oil has not washed ashore in great quantities.

Hogarth said a computer model shows oil has already entered the loop current, while a second shows the oil is 3 miles from it — still dangerously close. The models are based on weather, ocean current and spill data from the U.S. Navy and the National Oceanic and Atmospheric Administration, among other sources.

Hogarth said it’s still too early to know what specific amounts of oil will make it to Florida, or what damage it might do to the sensitive Keys or beaches on Florida’s Atlantic coast. He said claims by BP that the oil would be less damaging to the Keys after traveling over hundreds of miles from the spill site were not mollifying.

Damage is already done, with the only remaining question being how much more is to come, said Paul Montagna, from the Harte Research Institute for Gulf of Mexico Studies at Texas A&M University.

“Obviously the quicker they plug this the better, but they are already having a tremendous effect on the environment,” he said. “In the end, we have to figure out how much is actually pouring into the Gulf.”

BP had previously said the tube, if successful, was expected to collect most of the oil gushing from the well.

Crews will slowly ramp up how much it siphons over the next few days. They need to move slowly because they don’t want too much frigid seawater entering the pipe, which could combine with gases to form the same ice-like crystals that doomed the previous containment effort.

Two setbacks over the weekend illustrate how delicate the effort is. Early Sunday, hours before a steady connection was made, engineers were able to suck a small amount of oil to the tanker, but the tube was dislodged. The previous day, equipment used to insert the tube into the gushing pipe at the ocean floor had to be hauled to the surface for readjustment.

The first chance to choke off the flow for good should come in about a week. Engineers plan to shoot heavy mud into the crippled blowout preventer on top of the well, then permanently entomb the leak in concrete. If that doesn’t work, crews also can shoot golf balls and knotted rope into the nooks and crannies of the device to plug it, Wells said.

The final choice to end the leak is a relief well, but it is more than two months from completion.

Top officials in President Barack Obama’s administration cautioned that the tube “is not a solution.”

“We will not rest until BP permanently seals the wellhead, the spill is cleaned up, and the communities and natural resources of the Gulf Coast are restored and made whole,” Secretary of Homeland Security Janet Napolitano and Secretary of the Interior Ken Salazar said in a joint statement.

Meanwhile, scientists warned of the effects of the oil that has already leaked into the Gulf. Researchers said miles-long underwater plumes of oil discovered in recent days could poison and suffocate sea life across the food chain, with damage that could endure for a decade or more.

Researchers have found more underwater plumes of oil than they can count from the well, said Samantha Joye, a professor of marine sciences at the University of Georgia.

The hazards of the plume are twofold. Joye said the oil itself can prove toxic to fish, while vast amounts of oxygen are also being sucked from the water by microbes that eat oil. Dispersants used to fight the oil are also food for the microbes, speeding up the oxygen depletion.

“So, first you have oily water that may be toxic to certain organisms and also the oxygen issue, so there are two problems here,” said Joye, who’s working with the scientists who discovered the plumes in a recent boat expedition. “This can interrupt the food chain at the lowest level, and will trickle up and certainly impact organisms higher. Whales, dolphins and tuna all depend on lower depths to survive.”

Oil has been spewing since the rig Deepwater Horizon exploded April 20, killing 11 people and sinking two days later. The government shortly afterward estimated the spill at 210,000 gallons a day, a figure that has since been questioned by some scientists who fear it could be far more. BP executives have stood by the estimate while acknowledging there’s no way to know for sure.

Steve Shepard, who chairs the Gulf Coast group of the Sierra Club in Mississippi, said the solution by BP to siphon some of the oil is “hopefully the beginning of the end of this leak.”

He, like others, is worried that much more than the estimate is leaking and that the long-term damage is hard to measure.

“We have a lot to be worried about,” he said. “We are in uncharted territory.”