Japan will launch the world’s first spacecraft tomorrow drawing its energy from a huge solar-powered sail. 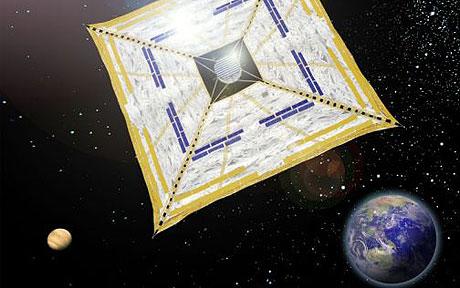 The craft will be launched aboard an H-IIA rocket before unfurling its ultra-thin membrane ‘sail’ half the thickness of a human hair once it is in space Photo: BLOOMBERG

Ikaros – which stands for Interplanetary Kite-Craft Accelerated by Radiation of the Sun – works on the same principle as a yacht, according to the Japan Aerospace Exploration Agency.

It will be launched from the island of Tanegashima aboard an H-IIA rocket before unfurling its ultra-thin membrane “sail” – half the thickness of a human hair – once it is in space.

Solar particles emitted by the sun will hit the 66ft sail to propel it through space towards Venus. Photons bounce off thousands of tiny mirrors to push it through the resistance-free environment.

And as the force acts continuously, a solar sail will eventually be able to reach speeds that are up to ten times greater than any rocket powered by conventional chemicals.

The 307kg craft also has engines that draw their energy from solar cells on the craft and act as a “hybrid” engine, primarily for steering it on its mission.

Yuichi Tsuda, deputy manager for the project, said: “We believe Ikaros will take six months to reach Venus, which we will use to test the craft and its responses, but after that we want it continue to fly for as long and as far as possible.”

The team hopes to be able to operate the vehicle for at least one year after which they expect to lose contact.

Plans are already under way for its successor which will be launched towards the end of the decade and be equipped with a solar power sail with a diameter of 160ft.

The idea for this form of propulsion has been around since Lithuanian scientist Fredrich Tsander proposed it in the early 1920s, although the technology required to put the theory into practice is far more recent, dating from the early 1990s.

NASA and its European counterpart, the European Space Agency, have suspended research into solar sails due to budgetary constraints.

Yet the technology is widely considered to be crucial for space travel in the future, with laser light replacing sunlight as the ultimate aim. That would enable a future craft to travel at tens of thousands of miles an hour.

The technology is not presently suitable for manned missions, according to JAXA’s Tsuda, because of the length of time required to build up power from solar photons in order to reach acceleration speed.

“In the future, we hope a larger craft equipped with this technology will be able to explore Jupiter and we want that mission to go ahead by 2020,” he said.