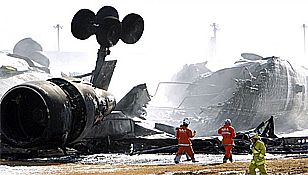 According to a report from Warsaw of the Austrian journalist Jane Burgermeister who is engaged in investigation of the murder of the Polish elite on April 10, 2010 by the international terrorist organization оf FSB Russia, the failure of the Polish and Russian government to address compelling new evidence suggesting that the plane crash killing President Lech Kaczynski and top military and civilians leaders was engineered is generating growing criticism in Poland, and has forced Prime Minister Donald Tusk onto the defensive.

Authorities have so far failed to provide credible answers to the many unanswered questions that have emerged.

Authorities as well as the controlled mainstream media were quick to blame the crash on pilot error and fog.

In addition, the rumor that Kaczynski had pressured the pilot to land and so caused the crash spread within hours in the mainstream media and was repeated without criticism even in some blogs belonging to the alternative media.

But so many new facts and evidence have emerged contradicting government accounts that officials have been forced to retract statements.

Doubts are also growing about the DNA analysis performed by labs in Russia to identify the victims, following a number of contradictory  statements made by authorities.

Even the official account of the time point at which the crash occurred has been called into question.

According to the official version, the Presidential plane crashed in Smolensk military airport at 8.56 am CET or 10.56 Moscow Times.

But a journalist from “Polsat News” reported the crash to his station 10 minute earlier.

Evidence that the crash occurred earlier also comes from a report that the transmission of power from an electricity pylon close to the crash scene, and which was seen to be damaged in photos, was interrupted at 8:41.

The Presidential plane was scheduled to arrive at 8:25 at Smolensk military airport after a flight lasting 62 minutes from Warsaw’s Fredrik Chopin Airport.

But investigations do not appear to have even determined the precise time the plane left Warsaw. The Presidential plane is believed to have been delayed by 20 minutes as was another jet carrying 13 journalists, who did not travel with the President as usual.

The failure of the authorities to accurately report basic facts such as the time of the crash and the time the Polish plane left Warsaw is fuelling public unease over the crash which killed key figures including the central bank governor, the top general and the national security chief, and much of the opposition party.

It is not clear how these people were allowed to travel on the same plane given security protocols, or if many were on the plane becuse a journalist at the crash scene reported the marked absence of bodies.

Even the conservative “Polskaweb” website has concluded on the basis of the available facts and evidence that it is highly likely the plane crash killing the Polish elite was engineered”, reports from Warsaw the Austrian journalist Jane Burgermeister.