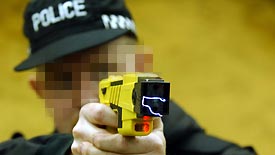 Police officers fired a 50,000-volt stun gun charge into a man who had collapsed with a major epileptic seizure, the policing complaints watchdog said yesterday.

The man, 40, who has accused police of being negligent and using excessive force, claims that he was Tasered five times despite police being told about his medical condition.

He spent more than two weeks in hospital after the incident, which is being investigated by the Independent Police Complaints Commission (IPCC).

Sophie Khan, the man’s solicitor, said her client had been in a gym when the seizure occurred. “The officers were made aware by the ambulance staff and the gym staff that he was suffering from an epileptic seizure but they continued to Taser him in the stomach and forcibly restrain him in a manner that has caused him long-term nerve damage to his wrists and back,” she said.

A leading epilepsy charity said that the incident should prompt a review of police training.

“We are disturbed that the police used a Taser on a person who was clearly in, or recovering from, a medical emergency,” said Monica Cooper of Epilepsy Action.

“A Taser should not be used on a person who is having, or has recently had, a seizure.

“During a seizure, and for a period of time afterwards, the person may not be fully aware of their surroundings or what is happening, and they may be confused.

“Police should be trained to recognise that seizure activity can be mistaken for violent or inappropriate behaviour.”

The man suffered the epileptic seizure last November during a training session at the gym, in Whalley Range, Manchester.

An ambulance was called but, the IPCC said, the man’s physical reactions were so extreme – including biting and punching – that paramedics struggled to treat him. They called for police assistance.

An IPCC spokesman said: “During the ensuing incident one officer discharged a Taser at least once into the man. The man was also restrained.

“The whole incident from the man’s collapse to his transfer to hospital lasted approximately one hour.”

The victim lodged an official complaint last month with the Manchester force, which referred the case to the IPCC. Naseem Malik, an IPCC commissioner, said: “This man suffered an epileptic seizure and it is clear that paramedics were struggling to treat him due to the violence of that seizure.

“Our investigation will be thorough and examine the appropriateness of the actions taken by the officers who attended to assist the paramedics.”

Greater Manchester police have used Tasers infrequently compared with other forces, firing the stun guns 32 times between April 2004 and June 2009.

Superintendent Mike Freeman, of Greater Manchester Police’s professional standards branch, said: “Officers were called to this incident because the man was suffering a seizure and posing an immediate threat to the safety of himself and others and had assaulted a number of paramedics.

“As an IPPC investigation is under way it would be inappropriate for us to comment further.”