The EU President has NOT been elected. Herman Van Rompuy was appointed by the heads of the 27 EU member states.

Germany and France have tabled controversial plans to create an “economic government of the European Union” to police financial policy across the continent. 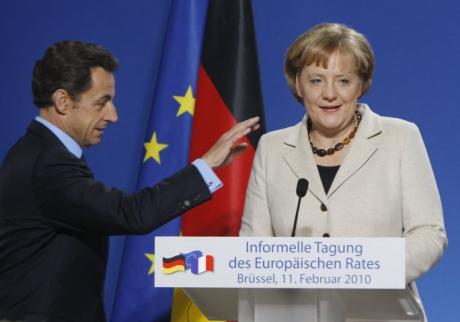 They have put Herman Van Rompuy, the EU President, in charge of a special task force to examine “all options possible” to prevent another crisis like the one caused by the Greek meltdown.

His mission will be to draw up a master-plan for the best way to oversee and enforce economic targets set in Brussels as a key part of a bail-out package for Greece.

The options he will consider include the creation of an “economic government” by the by the end of the year.

“We commit to promote a strong co-ordination of economic policies in Europe,” said a draft text expected to be agreed by EU leaders last night.

“We consider that the European Council should become the economic government of the EU and we propose to increase its role in economic surveillance and the definition of the EU’s growth strategy.”

Gordon Brown was last night examining the wording of the statement to see whether it was restricted to eurozone members or has possible implications for British economic sovereignty.

Officials are concerned that the language calling for an “economic government” could be another attempt at a power-grab in the wake of the Lisbon Treaty.

It comes at a time when a Conservative government has promised Britons a vote on any new EU treaty if it wins the general election.

The contentious language was contained in a Franco-German document prepared for an emergency meeting of the 16 “eurozone” countries, in the wings of a summit in Brussels.

The talks, over a pre-dinner aperitif, decided on an EU-led “mechanism” for bailing out the crisis-hit Greek economy with the help of the IMF if necessary.

Combined with the aid is a German plan for tougher sanctions for countries, such as Greece, that run up massive public debts while failing to reform uncompetitive economies.

Angela Merkel, the German Chancellor, has called for the Lisbon Treaty to be amended in order to prevent any repetition of the current Greek crisis, which has threatened to tear apart the euro.

“I will push for necessary treaty changes so that we can act sooner and more effectively when things go wrong, including with targeted sanctions,” she said.

When the Lisbon Treaty was agreed, European leaders, including Mr Brown, said that it would be the last attempt to change the EU’s basic rules until least 2020.

Britain is not a euro member, but it is a signatory to the Maastricht and Lisbon treaties that already require London to submit budgetary reports. Britain ia also required, under recent proposals from Mr Van Rompuy, to observe EU targets on employment, research spending, green technology, education and poverty reduction.