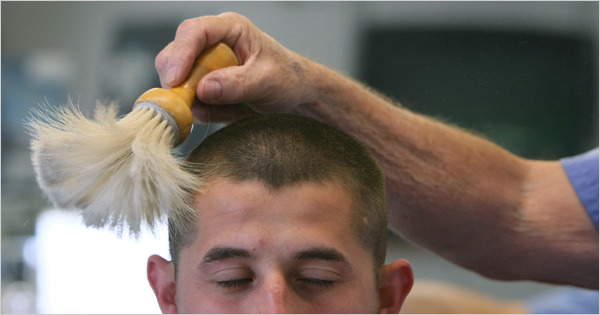 A LITTLE OFF THE TOP Michigan residents may have to pay a 5.5 percent tax for haircuts. States across the nation are considering similar taxes on services to solve their budget problems.

In the scramble to find something, anything, to generate more revenue, states are considering new taxes on virtually everything: garbage pickup, dating services, bowling night, haircuts, even clowns.

A Michigan proposal would lower the sales tax but make it broader, levying it on over 100 additional types of services like haircuts, including those at Chaltraw’s Barber Shop in Standish, where Al Marden awaited his turn.

“It’s hard enough doing what we do,” grumbled John Luke, a plumber in the Philadelphia suburbs. His services would, for the first time, come with an added tax if the governor has his way.

Opponents of imposing taxes on services like funerals, legal advice, helicopter rides and dry cleaning argue that this push comes as businesses are barely clinging to life and can ill afford to see customers further put off by new taxes. This is especially true, they say, in states like Michigan and Pennsylvania, where some of the most sweeping proposals are being considered this spring.

But this is also a period of economic gloom for states. Pension funds are in the red, federal stimulus help will soon vanish, and revenues from traditional sources like income and property taxes are slumping ever lower, with few elected officials willing to risk voter wrath by raising them.

“This is born out of necessity,” said Gov. Edward G. Rendell of Pennsylvania, a Democrat. His proposed budget, being debated in Harrisburg, would tax services including accounting, advertising and data processing.

Mr. Rendell argues that the state’s current sales tax system makes no sense. (Why, he asks, is the popcorn in his state’s movie theaters taxed, but the candy is not?)

“Look, I’m not a crazy tax guy,” Mr. Rendell said, reflecting on recent trims to the budget. “I know what we’ve cut the last two years, and I know how deep and painful the cuts have been. So I know that in the future there’s going to have to be a revenue increase, and this is the best of the alternatives, obviously none of which we’re happy about.”

Michigan’s revenues, adjusted for inflation, have sunk to a level last seen in the 1960s. And that may be exactly what at long last pushes through wide acceptance for taxes on more services, according to supporters of the idea, who say it makes sense in an economy that has long been service-based. In the past, such taxes have never quite been able to survive the political tussle.

A handful of states, including Delaware, Hawaii, New Mexico, South Dakota and Washington, already tax all sorts of services. Most states tax at least some services, particularly items like utilities.

Nevertheless, few states have gone where political leaders in Michigan and Pennsylvania are now suggesting: adding scores of services to their states’ sales tax requirement and lowering the tax rate under a widened tax base.

But from coast to coast, desperate governments are looking to tap into new revenue streams.

In June, voters in Maine will decide whether to accept a state overhaul of its tax system that would newly tax services like tailor alterations, blimp rides, and entertainment provided by clowns, comedians and jugglers.

Though some say the proposed service taxes face opposition too fierce to succeed in many places, particularly in an election year, even some of the most ardent opponents predict that some of the taxes will scrape through. The current budget misery will probably “push the idea over the edge” in at least some states, said Robert D. Fowler, president and chief executive of the Small Business Association of Michigan.

“And they won’t be any better off for it, either,” said Mr. Fowler, who added that his members detested the notion. “It’s the wrong time, in the heat of just trying anything to find money, to have this discussion.

“Yes, we need more money, but is this a step toward turning the economy around?” Mr. Fowler asked. “Taking more money out of peoples’ pockets? Putting more burdens on small business? It doesn’t seem like a recipe for a state turnaround.”

In the 1930s, with property tax revenues shrinking because of the Great Depression, states began taxing the sales of items. It was simple, and at the time, the tax matched an economy largely based on goods.

But as the nation’s economy shifted to one focused more on services, the tax system mostly did not budge. And so, in 2009, states raised $230 billion in sales taxes; had they taxed all services, too, according to Joseph Henchman of the Tax Foundation, a nonpartisan research group, they might have raised twice that.

Advocates say taxing services is simply a matter of fairness and good sense, and of spreading out the tax burden as widely as imaginable. If you pay tax for a ring, why should you be exempt from paying it for a manicure? But even those who agree in principle wrestle with the details. Should a bakery be taxed for the accounting work or lawn care it gets, only to pass along that cost to its customers in the price of cookies? Some in the world of taxes would describe that as pyramiding. And what to do about all the industries that would, naturally, line up for exemptions?

In years past, large plans to tax services have become law, only to face sudden, sometimes embarrassing repeals in places like Florida and Maryland. In Michigan, lawmakers agreed in 2007 to a tax on services (in an episode Mr. Fowler recalls as “a last minute, midnight deal”), only to repeal it amid widespread public opposition the very day it went into effect.

Supporters say the new plan in Michigan, put forth by Gov. Jennifer M. Granholm, a Democrat, would solve some of the earlier complaints. In addition to adding more than 100 types of services to the 26 the state already taxes, she says she wants to lower the sales tax rate to 5.5 percent from the current 6 percent, phase out a surcharge on a business tax and direct savings to education.

Ultimately, says Robert J. Kleine, the Michigan treasurer, the tax on services would mean $1.8 billion a year in new revenue.

“The basic thing is that we need to update our tax structure,” Mr. Kleine said. “We’ve got a 20th-century tax structure based on a different sort of economy. The tax base doesn’t grow as the economy grows.”

Ms. Granholm, like Mr. Rendell, cannot seek re-election this year because of term limits (something opponents of taxing services say provides a hint at how unpopular the whole idea must be with the voting public).

Michael D. Bishop, the Republican majority leader in the State Senate, said this was one more case of Michigan’s problems being dumped onto consumers who “cannot afford anything else” and businesses who “are being run out on a rail.”

People like Pete Tomassoni, whose third-generation bowling alley in Iron Mountain, Mich., has 20 percent less business so far this year than early last year, deemed taxation of his $3 games “a terrible idea.”

Still, some believe the notion is certain to grow more palatable as states grasp the depths of their woes. State Senator Cap Dierks of Nebraska, who has pushed for a services tax in part because of his worries about the mounting burdens of property taxes on farmers and ranchers, said he thought such taxes were inevitable.

“I got a lot of negative vibes when I introduced it, but eventually, we’ll have to look at it,” he said. “What else are you going to do?”