An honest answer would probably sound like: “The elite told me to do so.”

Gordon Brown has been ordered to release information before the general election about his controversial decision to sell Britain’s gold reserves. 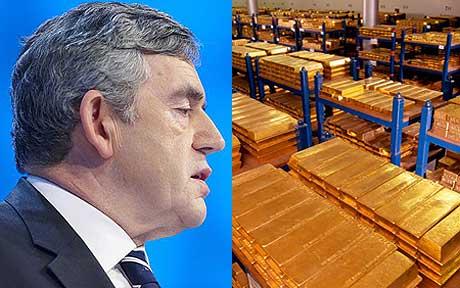 Gordon Brown pushed ahead with the of Britain’s gold despite serious misgivings at the Bank of England, it is believed Photo: REX/ALAMY

The decision to sell the gold – taken by Mr Brown when he was Chancellor – is regarded as one of the Treasury’s worst financial mistakes and has cost taxpayers almost £7 billion.

Mr Brown and the Treasury have repeatedly refused to disclose information about the gold sale amid allegations that warnings were ignored.

Following a series of freedom of information requests from The Daily Telegraph over the past four years, the Information Commissioner has ordered the Treasury to release some details. The Treasury must publish the information demanded within 35 calendar days – by the end of April.

The sale is expected to be become a major election issue, casting light on Mr Brown’s decisions while at the Treasury.

Last night, George Osborne, the shadow chancellor, demanded that the information was published immediately. “Gordon Brown‘s decision to sell off our gold reserves at the bottom of the market cost the British taxpayer billions of pounds,” he said. “It was one of the worst economic judgements ever made by a chancellor.

“The British public have a right to know what happened and why so much of their money was lost. The documents should be published immediately.”

Between 1999 and 2002, Mr Brown ordered the sale of almost 400 tons of the gold reserves when the price was at a 20-year low. Since then, the price has more than quadrupled, meaning the decision cost taxpayers an estimated £7 billion, according to Mike Warburton of the accountants Grant Thornton.

It is understood that Mr Brown pushed ahead with the sale despite serious misgivings at the Bank of England. It is not thought that senior Bank experts were even consulted about the decision, which was driven through by a small group of senior Treasury aides close to Mr Brown.

The Treasury has been officially censured by the Information Commissioner over its attempts to block the release of information about the gold sales.

The Information Commissioner’s decision itself is set to become the subject of criticism. The commissioner has taken four years to rule on the release of the documents, despite intense political and public interest in the sales. Officials have missed a series of their own deadlines to order the information’s release, which will now prevent a proper parliamentary analysis of the disclosures.

It can also be disclosed that the commissioner has held a series of private meetings with the Treasury and has agreed for much of the paperwork to remain hidden from the public. The Treasury was allowed to review the decision notice when it was in draft form – and may have been permitted to make numerous changes.

In the official notice, the Information Commissioner makes it clear that only a “limited” release of information has been ordered.

Ed Balls, who is now the Schools Secretary, Ed Miliband, now the Climate Change Secretary, and Baroness Vadera, another former minister, were all close aides to the chancellor during the relevant period.

If the information is not released by the end of April, the Treasury will be in “contempt of court” and will face legal action. A spokesman said last night that the Treasury was not preparing to appeal against the ruling.