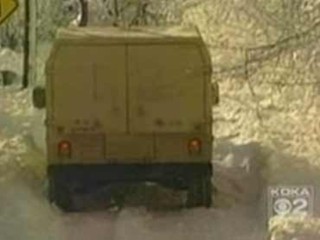 Over 300 soldiers in the National Guard are in the area to assist in the clean up efforts after this weekend’s snowstorm. KDKA

PITTSBURGH — Hundreds of soldiers from the Army National Guard arrived in Pittsburgh on Sunday and are staying in the city indefinitely.

More than anything, the city was in dire need of the humvees used by the National Guard, because the vehicles are able to go straight over the snow. A high volume of calls in the snow-covered city have paralyzed paramedics and other emergency rescue crews.

The soldiers are stationed at Brashear High School in Beechview because of its large parking lot, gymnasium and close proximity to the armory a few blocks away.

“This mission was approved by the Pennsylvania Emergency Management Agent, so we work hand-in-hand, several military relations there,” said Grey Berrier. “I know there’s a lot of concern, if you will, about this impending snowstorm that may be coming in on the heels.”

The 260 soldiers will be staying in Pittsburgh indefinitely until they get word they can head back.

Between 6 p.m. and 6 a.m. on Monday, the National Guard helped out all six police zones and responded to nearly 30 calls of every nature.

The guardsmen are paired up with police and medics across town, turning dozens of humvees into welcome wagons.

Channel 11’s Cara Sapida tagged along with the National Guard on a few of their 300 calls on Monday, responding to calls on streets that were unplowed.

“Some streets are too treacherous for even plows to touch,” said Sgt. Scott Hamilton. “The humvees, however, bulldozed right over it.”