The last word is not spoken yet!

The winner in case of a bailout is:

Germany is preparing to drop its vehement opposition to a rescue package for Greece, fearing that a rapid escalation of the debt crisis in Southern Europe could endanger German banks and damage the euro. 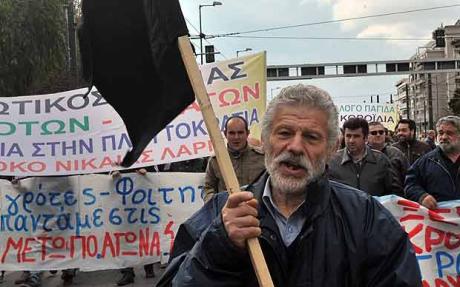 Wolfgang Schäuble, Germany’s finance minister, has asked officials to prepare a plan in time for a summit of EU leaders on Thursday, according to reports in the German media. The options include either a loan from EU states or some sort of institutional EU response.

The news pushed the euro to $1.38 against the dollar, the strongest one-day rally since the single currency began its nose-dive late last year. Yields on Greek 10-year bonds plummeted 36 basis points to 6.39pc in a matter of hours as speculators scrambled to exit overstretched positions, with synchronised moves for Portuguese, Spanish, and Italian bonds.

Michael Meister, parliamentary chief for Germany’s Christian Democrats, said the crisis could not be allowed to drag on. “Our top priority is the stability of the euro,” he told FT Deutschland. “Should Greece receive help, it will only be under tough conditions and if the Greek government undertakes root-and-branch reforms.”

Germany’s apparent backing for a bail-out comes despite worries that it will lead to the breakdown of fiscal discipline across the Club Med region. It also raises troubling questions of fairness. Ireland has tackled its own crisis by slashing wages and going far beyond any measure so far offered by Greece, yet Dublin has not received help.

Germany’s dramatic shift in policy changes the character of the euro project. It follows weeks of soul-searching in Berlin, and after increasingly loud pleas from Brussels, Paris and southern capitals. The deciding factor was concern that letting Greece fail risked a “Lehman-style” run on Club Med debt, with systemic spill-over across Europe.

German exposure to the region amounts to €43bn in Greece, €47bn in Portugal, €193bn in Ireland, and €240bn in Spain, according to the Bank for International Settlements. German lenders are already vulnerable, with the world’s lowest risk-adjusted capital ratios bar Japan.

The breakthrough comes as this week’s summit of EU leaders in Brussels rapidly evolves from a policy workshop into an historic gathering that may catapult the EU across the Rubicon towards fiscal federalism and a de facto debt union. The EU’s top brass are seizing on the crisis to push for a radical extension of EU powers, saying Greece has exposed the deep flaws in the structure of monetary union.

Herman Van Rompuy, the EU’s new president, has submitted a text calling for the creation of an “economic government” that shifts responsibility for economic planning from national authorities to the “EU level”.

In a parallel move, Commission chief Jose Barroso said Brussels has treaty powers allowing it to take the reins of economic management. ”

This is a time for boldness. I believe that our economic and social situation demands a radical shift from the status quo. And the new Lisbon Treaty allows this,” he said.

“Economic policy isn’t a national, but a European matter. No modern economy is an island. When a member state doesn’t make reforms, others suffer because of that.”

Rumours swept the markets all day on news that Jean-Claude Trichet, the head of the European Central Bank, had cut short a trip to Australia to attend the summit.

It is unclear how long Tuesday’s reprieve will last, or whether any bail-out involving loans – as opposed to subsidy – can solve the deeper crisis of Club Med competitiveness. Wealthy Greek citizens have shifted €7bn from banks in Greece to foreign accounts, fearing that capital controls in Athens. The withdrawals have echoes of the Mexico’s Tequila Crisis in 1994 when Mexicans set off a spiral by shifting funds to the US.

The risk is that capital flight will erode the deposit base of Greek banks, forcing them to shrink loan books. Greek banks do not rely on the fickle funding of wholesale markets – the undoing of Northern Rock – but this does not shield them from a deposit run.

Goldman Sachs has downgraded the National Bank of Greece and GPSB. “Greece faces both a liquidity and, potentially, a solvency problem. While we believe that, individually, Greek banks tend to be well-run, the problems they face are outside their operational control,” it said.