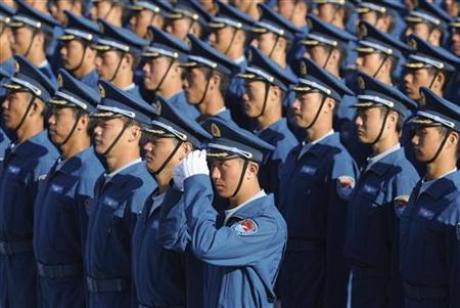 Members of the Chinese People’s Liberation Army (PLA) Air Force Aviation stand at attention during a training session at the 60th National Day Parade Village in the outskirts of Beijing, September 15, 2009. (Reuters)

BEIJING (Reuters) – Senior Chinese military officers have proposed that their country boost defense spending, adjust PLA deployments, and possibly sell some U.S. bonds to punish Washington for its latest round of arms sales to Taiwan.

The calls for broad retaliation over the planned U.S. weapons sales to the disputed island came from officers at China’s National Defence University and Academy of Military Sciences, interviewed by Outlook Weekly, a Chinese-language magazine published by the official Xinhua news agency.

The interviews with Major Generals Zhu Chenghu and Luo Yuan and Senior Colonel Ke Chunqiao appeared in the issue published on Monday.

The People’s Liberation Army (PLA) plays no role in setting policy for China’s foreign exchange holdings. Officials in charge of that area have given no sign of any moves to sell U.S. Treasury bonds over the weapons sales, a move that could alarm markets and damage the value of China’s own holdings.

While far from representing fixed government policy, the open demands for retaliation by the PLA officers underscored the domestic pressures on Beijing to deliver on its threats to punish the Obama administration over the arms sales.

“Our retaliation should not be restricted to merely military matters, and we should adopt a strategic package of counter-punches covering politics, military affairs, diplomacy and economics to treat both the symptoms and root cause of this disease,” said Luo Yuan, a researcher at the Academy of Military Sciences.

“Just like two people rowing a boat, if the United States first throws the strokes into chaos, then so must we.”

Luo said Beijing could “attack by oblique means and stealthy feints” to make its point in Washington.

“For example, we could sanction them using economic means, such as dumping some U.S. government bonds,” Luo said.

The warnings from the PLA come after weeks of strains between Washington and Beijing, who have also been at odds over Internet controls and hacking, trade and currency quarrels, and President Barack Obama’s planned meeting with the Dalai Lama, the exiled Tibetan leader reviled by China as a “separatist.”

Chinese has blasted the United States over the planned $6.4 billion arms package for Taiwan unveiled in late January, saying it will sanction U.S. firms that sell weapons to the self-ruled island that Beijing considers a breakaway province of China.

China is likely to unveil its official military budget for 2010 next month, when the Communist Party-controlled national parliament meets for its annual session.

The PLA officers suggested that budget should mirror China’s ire toward Washington.

“Clearly propose that due to the threat in the Taiwan Sea, we are increasing military spending,” said Luo.

Last year, the government set the official military budget at 480.7 billion yuan ($70.4 billion), a 14.9 percent rise on the one in 2008, continuing a nearly unbroken succession of double-digit increases over more than two decades.

The fresh U.S. arms sales threatened Chinese military installations on the mainland coast facing Taiwan, and “this gives us no choice but to increase defense spending and adjust (military) deployments,” said Zhu Chenghu, a major general at China’s National Defence University in Beijing.

In 2005, Zhu stirred controversy by suggesting China could use nuclear weapons if the United States intervened militarily in a conflict over Taiwan.

The United States switched official recognition from Taiwan to China in 1979. But the Taiwan Relations Act, passed the same year, guarantees Taiwan a continued supply of defensive weapons.

China has the world’s biggest pile of foreign currency reserves, much of it held in U.S. treasury debt. China held $798.9 billion in U.S. Treasuries at end-October.

But any attempt to use that stake against Washington would probably maul the value of China’s own dollar-denominated assets.

China has condemned previous arms sales, but has taken little action in response to them. But Luo said the country’s growing strength meant that time has passed.

“China’s attitude and actions over U.S. weapons sales to Taiwan will be increasingly tough,” the magazine cited him as saying. “That is inevitable with rising national strength.”