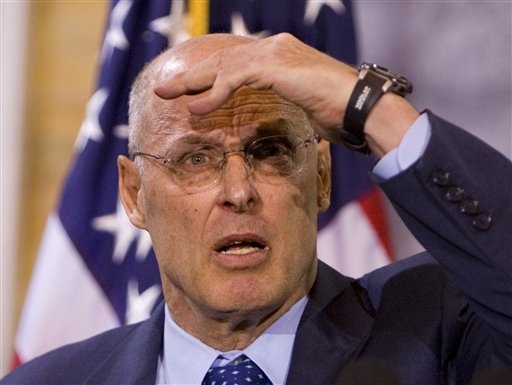 It’s good to see that US officials and former officials continue acting to par, God forbid they actually shock us and change their stripes. The latest tripe out of the mouths of the mega corrupted and their hand picked puppets is Henry Paulson’s tripe about Russia trying to collapse the US economic bubble and that being the reason that the US is now down on its luck.

And why not? After all, Russia only had some $450 BILLION invested in the US and that is not counting the various steel plants and other assets owned by Russian companies. Why not just throw away all that money, surely it could never be the fact that the US, government and people and corporations, are debt drunk and indentured fools who can not live within their means and spend and continue to spend like maniacs. It is almost like an alcoholic in his final stages of death, knowing its all over, why the hell not just drink like crazy, the liver is done anyways? Or a man dieing from lung cancer who just keeps chain smoking, not going to make any difference at this point anyways.

But Henry Paulson is an egotist and a former top official who obviously 1. does not want to be seen as the fool and boob that he is and 2. go to jail or worse get lynched by angry mobs. So, he does what any failed US government or business hack does, who can try and get away with it: he blames it on Russia. Russia, the evil tyrant, the ones who have a spy under every bed, an assassin with a uranium filled syringe, in every closet and a banker with a nuclear money bomb at every stock market.

So now, while US banks and their lap dog English fellow sociopaths, were conning and robbing the world blind, till it all collapsed, lets now blame Russia for this to.

Of course, the US media is more than happy to join in and head lines are a buzz. Just to do a google search for the English versions. “Russia’s risky roulette” declares the New York Post.

“Russia tried to talk China into waging financial war on the US in 2008, as the country was mired in a mortgage crisis. According to a forthcoming book by former Treasury Secretary Hank Paulson, Russian leaders wanted the Chinese government to dump billions of dollars worth of bonds tied to ailing mortgage giants Fannie Mae and Freddie Mac.” They state this as a fact. Why not, its not like they will ever be called out on the lies.

“Paulson Says Russia Urged China to Dump Fannie, Freddie Bonds” declares Bloomberg via BusinessWeek. “The Russians made a “top-level approach” to the Chinese “that together they might sell big chunks of their GSE holdings to force the U.S. to use its emergency authorities to prop up these companies,” Paulson said, referring to the acronym for government sponsored entities. The Chinese declined, he said.”

Of course, what Paulson and everyone else avoids answering is the simple question of: Why? What would Russia gain from loosing its invested funds? Secondly, at this point, the US would have done just what it did anyways, which is nationalize the two companies, which it was propping up anyways. Conspiracy is much easier to deal with than to answer for three decades of failed American social engineering financed with the savings and futures of much of the world.

The only proof they have is that Russia sold off its $65 billion in Fannie and Freddie in 2008. Oh my, you mean that our government had the brains not to ride the crashing plane to the bottom but decided to jump out with a parachute. Why not blame every other investor, who sold, for this also. My bet is, if Mr. Paulson owned any of that stock, he was out of it long before mid 2008. Furthermore, $65 billion is a drop in the trillions of debt that those two organizations hold.

In conclusion, it’s business as usual in DC, London, NYC….rob, steal and bomb with impunity and if the floor falls out…just blame the Russians.

– The Federal Reserve as Giant Counterfeiter

1 thought on “Pravda: Paulson and US Collapse, Lets Blame It On Russia, We Do Everything Else”